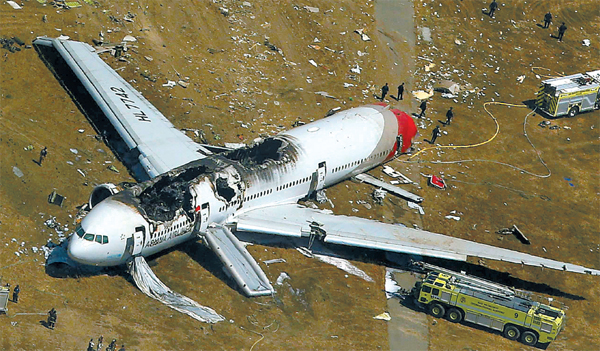 Firefighters surround an Asiana Airlines Boeing 777 plane after it crashed while landing at San Francisco International Airport in California Saturday U.S. time. Two people were killed and 130 were hospitalized. [REUTERS/NEWS1]

The 307 passengers and crew aboard Asiana Flight 214 were from eight nationalities, around half Chinese and a quarter Korean.

The 10-hour direct flight came to a sudden end as the Boeing 777 plane, which originated from Shanghai and departed from Incheon International Airport, crashed into the runway jutting out of the San Francisco Bay area around 11:30 a.m. local time, according to the U.S. Federal Aviation Administration and Seoul government officials.

The tail section of the plane hit the runway and broke off. Passengers scrambled down inflated safety chutes on their own while smoke billowed out from the wreckage and firefighters fought the flames.

Two Chinese girls, aged 17 and 18, were found dead, confirmed Korean government and Asiana officials yesterday. One-tenth of the passengers were under the age of 12. One group of Chinese students was on its way to summer camp.

The San Francisco fire chief said the two teenage girls who died were found by medics outside of the heavily-damaged jetliner on the runway. They had been seated toward the back of the aircraft.

A video clip posted on YouTube showed the jet’s tail being ripped off when it hit the runway and the top of the aircraft’s fuselage burnt away, exposing the skeletal interior of the plane. The wing, engine and landing gear appeared damaged.

Eyewitnesses claim the plane was unsteady as it landed, flying too low and at a strange angle.

Choi Jeong-ho of the Korean Ministry of Land, Infrastructure and Transport said, “The tail of the Asiana flight hit the runway and the aircraft veered to the left out of the runway.”

San Francisco Fire Chief Joanne Hayes-White said that firefighters and emergency respondents arriving on the scene found some people in the shallow water of the bay, though the plane did not land in the water, supposedly cooling themselves from their burns.

There were 291 passengers and 16 crew members aboard the aircraft, of which 77 were Korean, 141 Chinese and 61 American. The remaining passengers included Japanese, Indian, Vietnamese, Canadian and French citizens according to Asiana, the nation’s second-largest airline.

Of the passengers, 31 were children under the age of 12, including one infant. “Everyone has been accounted for,” San Francisco Mayor Ed Lee told reporters at a briefing yesterday evening.

A senior Korean Foreign Ministry official said that according to its consulate in San Francisco, “Of the 77 Korean nationals aboard the plane, 44 were in the process of being treated in hospitals.”

The injured were transferred to 10 hospitals within 30 minutes of the airport, he added, not confirming the exact number of critically injured Korean citizens, stating “there were several.”

The critical injuries may lead to a higher death toll, he added. A list of passengers has not been released for privacy reasons. The Foreign Ministry and involved parties are working on contacting family members, he said.

The official said that the plane, en route to San Francisco from Seoul, originated from Shanghai, explaining the large number of Chinese passengers aboard the flight, and added that “San Francisco has a sizeable Chinese population.”

China’s state-run Xinhua News Agency reported yesterday that the 141 Chinese citizens aboard included a group of 34 high school students on their way to summer camp in the United States.

While a Samsung executive and others victims of the crash kept Twitter buzzing, Chinese survivors used their Twitter equivalent Weibo to post updates. One survivor, a business executive Xu Da, wrote from his iPhone, “It took half an hour from landing to evacuation,” and that “The passengers and rescuers were both very calm. No one was shouting, everything was orderly.”

The Chinese consulate in San Francisco has set up an emergency command group, Xinhua reported.

The U.S. National Transportation Safety Board said it was sending a team of investigators to San Francisco to determine the cause of the crash.

The FBI said there was no evidence that the crash was an act of terrorism.

The National Transportation Safety Board (NTSB) has sent a full team to San Francisco to investigate the crash.

“The team will include people focused on operations, human performance, survival factors, airport operations as well as aircraft systems, structure and power,” the NTSB chairwoman, Deborah Hersman, said in a briefing in Washington.

Asiana Airlines issued a formal apology at a press conference in Seoul yesterday.

“To my knowledge, there wasn’t any engine failure,” said Asiana Airlines CEO Yoon Young-doo, nor any problems caused by the 777-200 plane, after apologizing to passengers and their families for the accident.

Yoon clarified, “There was no emergency in-flight announcement before landing” and that the captain of the flight contacted the San Francisco airport’s control tower after the landing.

Four pilots alternated in operating the plane, said the airline, including two captains with around 10,000 hours of flying experience, said Yoon.

Asiana dispatched a group of investigators to San Francisco on Sunday. Seoul’s Transportation Ministry also sent a team to work with their U.S. counterparts. Experts state that the exact cause of the crash may take many months or even years to determine.

President Park Geun-hye through a spokeswoman sent out her condolences to “passengers and their families who have suffered in this unforeseen event,” adding “all relevant bodies .?.?. will work together and make every effort to quickly deal with the aftermath of this accident.”

The White House in statement said that President Barack Obama “directed his team to stay in constant contact with federal, state and local partners as they investigate and respond to the accident.”