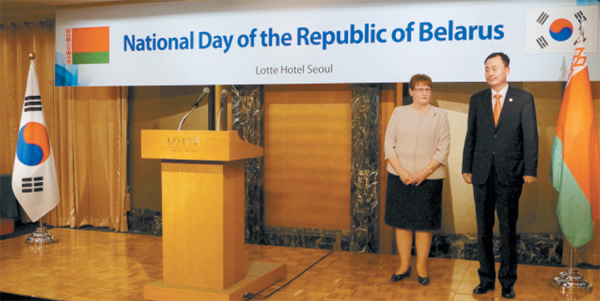 Belarusian Ambassador Natallia Zhylevich (left) and Vice Unification Minister Kim Nam-sik prepare for their speech on June 25 to celebrate the National Day of Belarus. Provided by the Embassy of Belarus

The Embassy of Belarus held a Belarus National Day celebration at the Lotte Hotel in central Seoul on June 25, ahead of the country’s national day that fell on last Wednesday.

“Expanding people-to-people contacts, as well as deepening mutual understanding and supporting each other in the international arena, have virtually shortened the geographical distance between Belarus and Korea,” said Zhylevich in her opening remarks.

The Korean vice minister also echoed the strengthening ties over the years by underlining things that the two countries have in common.

“Both our countries lack natural resources, but advanced science and technology and excellent human resources have resulted in great industrial and economic development,” said Kim during the speech.

“I believe these similarities have played a role in building the friendship we share today. And since establishing the bilateral ties in 1992, we have grown closer over the past 21 years,” he said.

The commemoration was held in the form of a reception party and was attended by a number of diplomats, religious leaders and people from the business circle. One year and eight months into her position, the ambassador said there is a bilateral trade of $200 million and dozens of joint projects in science and technology, over a hundred students’ exchanges every year and a very dynamic cultural dialogue.

The ambassador underscored the ongoing technology cooperation as Belarus builds its e-government.

“Korea has a great economic technology potential, so we’d like to cooperate in e-government where government information and the services to the citizens are done through the Internet and digital medium,” she said.

“We have hardware but we need software as well. We’d like to learn from Korea about how to apply the technology into a system.”

The ambassador said what Belarus can offer is access to Russia.

“Korea has advanced technology and we [Belarus] can offer access to a bigger market, which is Russia.”

“Son won a silver medal in a World Cup tournament in Minsk, Belarus,” she said. “Korea and Belarus are cooperating more in sports now.”

The country declared independence in 1991 after the collapse of the Soviet Union.

An agreement on economic and scientific-technical cooperation as well as commerce was signed in 2011, facilitating stronger cooperation in various fields. The documents were also aimed at expanding the contacts in the sphere of education and culture and also the intergovernmental agreement on visa-free trips for citizens with diplomatic and service passports are under discussion.

Among Asian and African countries, Korea ranks fifth in trade partner with Belarus. Belarus has considered Korea as an attractive market for petrochemical and electronic production as well as a prospective supplier of up-to-date technologies and investments.