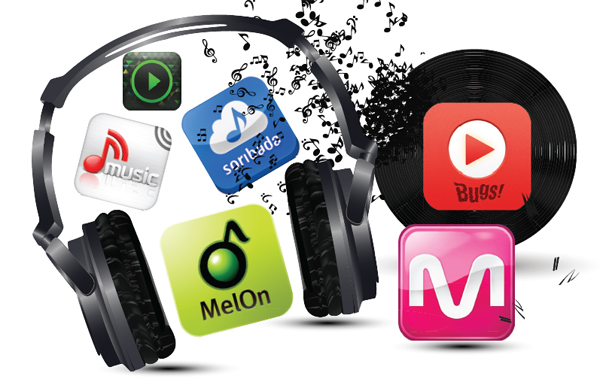 Kim Ji-min, 32, is a big music listener, thanks in part to an hourlong commute every day between Gangnam, Seoul, and Suwon, south of Seoul in Gyeonggi province. She says she used to illegally download most of her music, but thanks to the convenience of MelOn’s streaming service, she has paid 3,000 won ($2.63) each month to listen legally.

Now, however, with the price of the streaming service doubling to 6,000 won, Kim says she might go back to her old illegal downloading habits.

The government changed Korea’s digital rates from January, but because of a grace period, they only went into effect on July 1. Rates have risen significantly for all of Korea’s music services, including Mnet, Bugs Music and Soribada. Many music insiders say Korea’s miniscule payments rates need to rise closer to international standards to improve conditions for the music business, but others warn the hike will just push many music fans to illegal options.

If you’re keeping track at home, that means music in Korea used to cost 73 won for a download, but has now risen to 110 won, or less than one-tenth what iTunes costs - and that’s not factoring in the unlimited streaming. 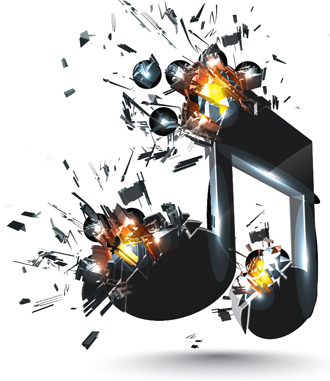 “I know a couple of thousand won is not that much when you compare it to purchasing a song in iTunes or something like that,” said a Seoul office worker surnamed Park, 28, who recently withdrew from Mnet’s Smartfree. “But when I think about four-thousand-something every month to listen to music compared to seven-thousand-something, I felt it was a little bit expensive.”

Fearing subscribers like Kim and Park will withdraw in bulk, service providers have been offering discounts and promotional packages to keep them paying, at least for the moment.

Major distributors like MelOn - which is operated by Leon Entertainment, a subsidiary of the nation’s No. 1 mobile carrier SK Telecom ? and Mnet - owned by the CJ Group ? have long been criticized for unfairly sharing their music revenues.

Typically music distributors in Korea keep 40 percent of revenues, although some take as much as 57.5 percent - all much higher than Apple, which keeps just 30 percent of iTunes sales. 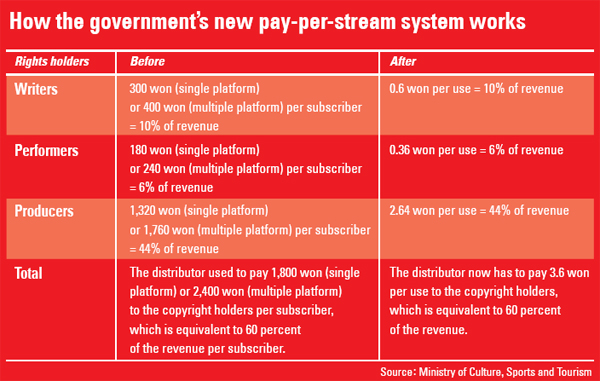 The Ministry of Culture, Sports and Tourism says it raised online music rates to protect the rights and interests of musicians and songwriters, and to help make up for the massive losses the music industry has suffered from declining CD sales.

“We came up with the cost after considering the average market price for a monthly flat-rate music streaming service, which is 6,000 won, and the average number of songs each consumer listens to each month, which is about 1,000 songs,” said an official from the ministry.

“The change will bring about more quality products by giving more benefits to songwriters and creating competition with one another,” added the official.

The ministry stated it will further increase royalties until 2015, although the amount has not been decided yet.

Late last year when the Psy galloped around the globe with his global hit “Gangnam Style,” Saenuri Party Representative Nam Kyung-pil criticized the country’s online music royalties system by revealing how much the world star had earned in Korea and the United States.

According to Nam, who sits on the National Assembly’s science and broadcasting committee, “Gangnam Style” only earned 3.6 million won in online royalties in Korea, coming from 2.86 million downloads and 27.32 million streams - that works out to an average of about 10.7 won per download and 0.2 won per stream.

However, in the United States, Nam calculated that Psy received the equivalent of 2.8 billion won for 2.9 million downloads. 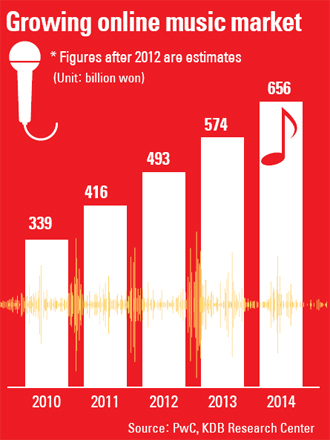 Psy may not be hurting for cash these days, but this is a debate that has a larger impact on indie musicians. Nam estimated that the average indie musician earns just two-to-three-million won a year.

On the other hand, cheap streaming has helped encourage many people to discover new bands.

“Surprisingly, I realized that there are so many artists that I came to be fond of in genres that I wasn’t even interested in,” noted Kim Ji-min, the former downloader.

While the new rates were chosen to help musicians and songwriters, already service providers say their subscription rates are dropping.

“We’ve been having numerous promotions and discounts, but that couldn’t stop the drop in new subscribers, not to mention people leaving us,” said an official from one of the major digital music providers who requested not to be identified. “We’ve sent out notification e-mails to our subscribers about the price increase and received a lot of complaints from them.”

Today, estimates of the size of Korea’s online music market vary widely, but everyone agrees they are substantial. The international music industry association IFPI says Koreans spent 221 billion won on music in 2011, 54 percent of that digital. But a PWC report estimated that figure was 416 billion won on digital alone, and the Korea Creative Content Agency believes online music was a massive 879.5 billion won - if true, that would make Korea’s the world’s No. 6 music market.

Korean consumers also appear to prefer streaming, as streaming accounts for 74 percent of online music spending and downloads continue to fall. In contrast, in the rest of the world downloads dominate, making up 71 percent of the online market.

Jeong Ji-yeon, head of the Consumers Union of Korea, warns that increasing prices could end up hurting the music industry.

“I agree on having copyright royalties increased and profit distribution to be appropriately distributed for the rights of musicians,” said Jeong. “However, by burdening consumers with increased prices before forming sufficient consensus, the system will definitely not make a soft landing.”