Round two of Kaesong talks to start today

Round two of Kaesong talks to start today 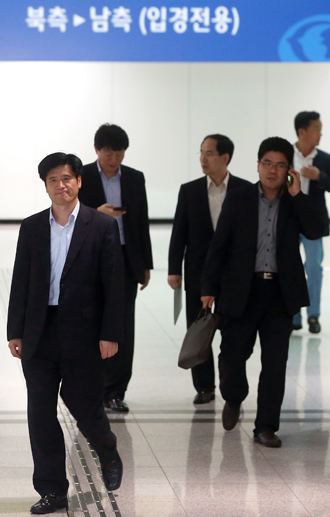 The two Koreas will have a second round of low-level talks today to take concrete steps to reopen a jointly-run industrial park, but disagreements still remain.

The talks will start at 10 a.m. at the Kaesong complex, located in the city of Kaesong in North Korean territory.

Although the advance schedule says it will be a one-day dialogue, there is a high possibility that the talks could continue until midnight or into tomorrow morning, like the 16-hour marathon discussion that started Saturday morning.

Officials of both Koreas yesterday exchanged the lists of their negotiators, but the North did not confirm agreement as of press time yesterday.

The owners of 62 out of the 123 South Korean companies operating in Kaesong will also visit the complex today for maintenance checks on their facilities and to retrieve finished products and raw materials stuck in the park for months.

All of them are machinery or electronics manufacturers and only one owner of each company can visit the complex.

“As we expect to hold more talks later, we decided to bring only half of the owners of the 123 companies this time,” a Unification Ministry official told reporters.

“Roughly 100 machinery or electronics manufacturers will visit first, and then we will bring the rest to the next talks.”

The official said the remaining 61 owners, who are mostly textiles or clothing makers, will visit the North tomorrow.

Concerns grew among owners of 46 machinery and electronics manufacturers that their facilities and equipment could be harmed by high humidity during the rainy season.

A total of about 150 South Koreans are expected to cross the border today including the negotiators, businessmen, three reporters and government officials.

South Korea sent 25 government officials and workers from KT and the Korea Electric Power Corporation to the complex yesterday for technical preparations such as installing telecommunication devices as the conference room in the complex has not been used for about two months. All of them returned to South Korea yesterday.

It’s been more than three months since North Korea imposed an entry ban on all people and cargo from the South to the zone on April 3.

At the talks over the weekend, both Koreas agreed to restart operations at the complex “as soon as all preparations are completed.”

Still, they had different priorities in the “preparations.” South Korea wants a pledge from North Korea not to make unilateral decisions that hold the park or its workers hostage or threaten the functioning of the businesses. The North wants immediate resumption of operations.

“We should take strong measures to prevent a future entry ban or withdrawal of workers by North Korea,” a South Korean government official told the JoongAng Ilbo yesterday. “This matter will be at the center of the negotiations starting tomorrow.”

“We want a sort of promise by a reliable North Korean official, like signing a paper pledging they would sincerely keep an agreement [with South Korea] from now on.”