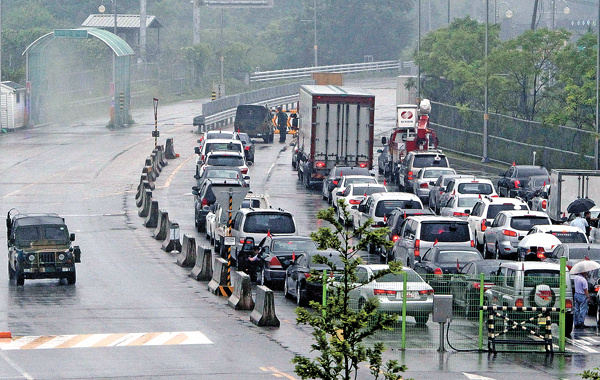 South and North Korea agreed yesterday to hold talks on reunions of families separated by the 1950-53 Korean War next week as they continue to negotiate the restarting of the Kaesong Industrial Complex.

Pyongyang also proposed yesterday talks to restart tours to Mount Kumgang but Seoul is still reviewing the offer as of last night.

South and North Korea held a second round of low-level talks on Kaesong yesterday at the industrial complex in the morning and the afternoon.

Separately through the Panmunjom liaison channel, the North proposed Red Cross talks on reunions July 19 and talks on restarting tourist visits to the Mount Kumgang resort on July 17.

South Korea responded that it will participate in the Red Cross talks because of the urgency of reunions of aging family members.

But it rejected the Mount Kumgang talks because Seoul wants to focus on the Kaesong talks, according to the Unification Ministry.

“The North made a proposal in the afternoon and the South’s government spent time internally reviewing the proposals,” Unification Ministry spokesman Kim Hyung-suk said. “It briefed reporters right after it informed the North of its response.”

The North proposed the Red Cross talks at Mount Kumgang or Kaesong but Seoul countered with a proposal to hold them at Panmunjom.

South Korean tours to Mount Kumgang were stopped in July 2008 after a South Korean tourist was shot dead by a North Korean guard. Seoul has demanded an apology and a promise that such an event would not occur again, which Pyongyang has refused.

In Kaesong yesterday, Southern negotiators said they pressed for an ironclad assurance that Pyongyang wouldn’t take the complex and its businesses hostage in the future when relations get tense.

“We explained in detail our idea of the constructive normalization and development of the complex into an international business zone,” Suh Ho, South Korea’s chief negotiator, told reporters yesterday after the one-day talks held at the Kaesong Industrial Complex, which has been shut for more than three months. “We repeatedly stressed that a unilateral shutdown of the complex should not be allowed again. 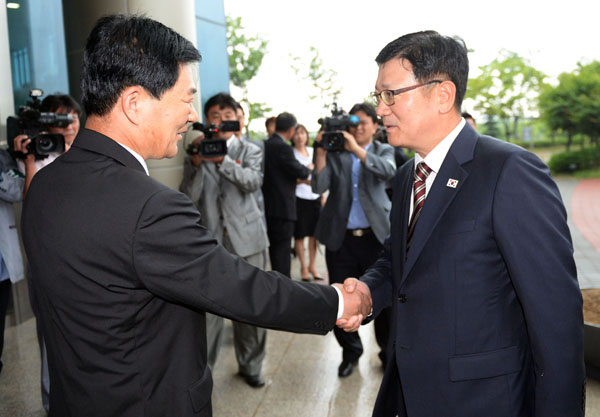 “North Korea said the reason for the disruption was because of some fundamental problems, like the fact that we insulted their utmost dignity,” Suh said. “But we stressed that, like them, we also have our own utmost dignity.”

North Korea denounced Southern media reports saying the revenues from the joint venture park were a vital source of hard currency for the impoverished regime and that meant that it would never shut it down. The entry ban came shortly after that denunciation.

When asked if the two Koreas reached any agreement yesterday, Suh said both sides basically agreed on the maintenance and development of the complex, but they sparred over their top priority. The South demands the regime not make unilateral decisions again threatening the businesses in Kaesong, while North Korea wants the immediate resumption of operations and doesn’t want to promise anything about the future.

But the two sides did agreed to hold a third round of talks on July 15 in Kaesong.

President Park Geun-hye reiterated her position on the Kaesong issues yesterday, saying, “In a situation in which we do not have guarantees about some basic conditions, we should not hurry to restart operations.”

The South Korean delegation crossed the Military Demarcation Line, the heavily armed border with the North, at around 8:30 a.m. It was composed of a total of 40 people including the three South Korean negotiators and reporters and media assistants.

The South’s three negotiators were the same as in the first round of talks over the weekend, headed by Suh, director of the Unification Ministry’s inter-Korean exchange and cooperation bureau. Their Northern counterparts were all unchanged, according to the Unification Ministry, with chief negotiator Pak Chol-su, vice director of the Central Special Zone Development Guidance General Bureau, a North Korean organization in charge of the Kaesong business district.

At the 25-minute morning session, friction arose over two issues: Whether they would immediately reopen the complex and whether they could develop the zone into an international business district by inviting in foreign investors.

“We emphasized that the complex should be a safe park, guaranteeing stable activities of the firms, and we should develop the complex into an international zone to attract foreign companies,” a Unification Ministry official told reporters. “We demanded solutions to ensure everyone that there would be never such an entry ban or disconnection of communications or withdrawal of workers again.

“Meanwhile, North Korea asked us to stop all activities that worked against the normal operations of the complex, mentioning [the remarks of] the June 15 Joint Declaration and Uriminzokkiri,” the official said. “They also called for fast maintenance checks and resumption of operations.”

The owners of 59 out of the 123 South Korean firms operating in the complex also visited the Kaesong complex yesterday separately from the delegation for maintenance checks on their facilities. They were accompanied by 36 government officials and workers from KT, Korea Electric and Power Corporation, Korea Water Resources Corporation and the Korea Electrical Safety Corporation who will help with maintenance issues. The government approved the visit of only one owner from each company.

The 59 owners were mostly machinery and electronics manufacturers who were worried that their facilities could be harmed by high humidity during the summer monsoon season.

The representatives of the remaining 64 firms, mostly textile and apparel makers, will visit the complex today.

The total losses by the 123 South Korean firms is estimated by the government to be about 700 billion won ($612 million), although the owners say it’s at least 1.5 trillion won.

After their visit to their plants, most of the machinery and electronics makers told reporters that the condition of their facilities, raw materials and finished products was better than expected, although some machines had started to become rusty and sensitive devices didn’t work.