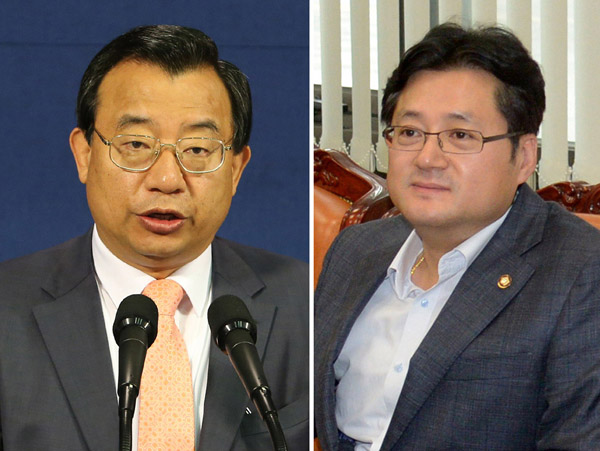 The Saenuri Party canceled all floor activities yesterday and the Blue House demanded an apology after the spokesman for the main opposition Democratic Party referred to President Park Geun-hye as “the offspring of someone who should not have been born,” in reference to her father, the late President Park Chung Hee.

At a briefing on Thursday, DP spokesman Hong Ihk-pyo called Park Chung Hee a gwitae, which can be loosely translated as someone who should not have been born. Literally, it refers to a fetus aborted from the womb.

Hong went on to compare Park to Japanese Prime Minister Shinzo Abe, whose maternal grandfather, former prime minister Nobusuke Kishi, was accused of being a Class-A war criminal by the Allied Forces in the aftermath of World War II but was later released. Kishi was industry minister during World War II.

Citing a book on Kishi and the late President Park, Hong compared the Japanese imperialistic military rule that Kishi served and the authoritarian rule of Park Chung Hee, and said, “Ironically, their offspring are now leaders of Korea and Japan,” referring to Park Geun-hye and Abe.

The comment came as ruling Saenuri Party and the DP lock horns over the National Intelligence Service’s meddling in last year’s presidential campaign, which Park has distanced herself from, and the issue of whether former president Roh Moo-hyun disavowed the Northern Limit Line, the de facto western sea border, in a summit in North Korea in 2007.

The Blue House and the Saenuri Party lashed out and demanded an apology from the Democratic Party.

Park’s spokeswoman, Kim Haing, said Hong’s remarks “are an insult to the people who voted for the president” and that he “crossed the line.”

Lee Jung-hyun, the senior presidential secretary for public affairs, held a press briefing yesterday morning and said, “Representative Hong Ihk-pyo’s remarks not only question his individual qualifications but were a thoughtless verbal attack that cannot come from a National Assembly representative.

“As if it’s not enough that North Korea verbally attacks our president, but to have our lawmakers speak of our president like that is an insult to our national dignity and its people and cannot be tolerated,” Lee added.

The Saenuri Party canceled its scheduled reading of the original transcript of the inter-Korea summit meeting between Roh and Kim Jong-il from 2007, along with all other National Assembly floor events scheduled for the day.

Two-thirds of the members of the National Assembly had earlier this month voted for the records of the conversation between the leaders to be opened to lawmakers.

A transcript of the conversation declassified by the National Intelligence Service last month was a copy from the presidential records. The new transcript is the original from the National Archives.

Officials were to visit the National Archives of Korea in Seongnam, Gyeonggi, yesterday to compare passages from the original with the copy describing Roh’s meeting with Kim.

The Saenuri Party convened an emergency Supreme Council meeting yesterday to come up with a response to Hong’s comments.

“This remark is an act of defamation and a direct attack on the head of state,” said Saenuri Party Chairman Hwang Woo-yea at the meeting. “A politician should not carry out acts that trample upon and downgrade the dignity of the country.

“[Hong] made the remark not as an individual politician but a party member, thus the Democratic Party needs to take appropriate measures,” he said, adding that an apology from a DP leader such as its chairman Kim Han-gill was in order.

The Saenuri Party further demanded that Hong resign to take responsibility for his words.

“This is not a matter we can just overlook as a party,” said majority floor leader Choi Kyung-hwan.

As the controversy snowballed, Hong responded that his remark “was quoting a line from a book” and that he “regrets if it was reflected as an attack on the president.” But he did not apologize.

When the Saenuri backed out of all plans for the day, the DP, which had been in the midst of a Supreme Council meeting, also discussed how to respond.