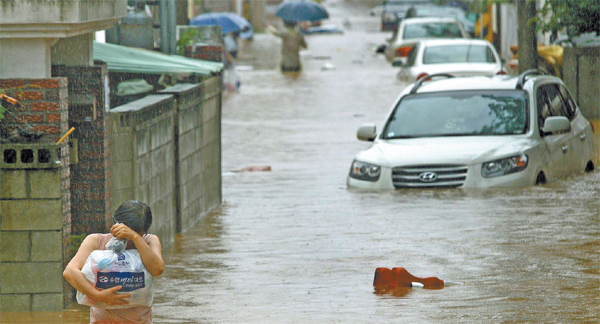 A resident of Chuncheon in Gangwon Province evacuates his house after the city was drenched with 125 millimeters (4.9 inches) of rain as of 6 p.m. yesterday, flooding many residential areas and stranding vehicles on the roads. [NEWSIS]

Korea’s central regions, including Seoul, Gyeonggi and Gangwon, were soaked by monsoon rains over the weekend, with some locations getting more than 200 millimeters (7.9 inches).

In contrast, the southern parts of the country experienced bright summer days with clear skies and sizzling temperatures. It was 30.5 degree Celsius (86.9 degree Fahrenheit) in Busan yesterday.

Seoul was slapped with 249 millimeters of precipitation over the weekend until 4 p.m. yesterday. Incheon got 148.2 millimeters of rain on Saturday alone according to the Korea Meteorological Administration.

As of 2 p.m. yesterday Gyeonggi’s Gapyeong County had 240 millimeters of precipitation accumulated from Saturday while Namyangju recorded 216 millimeters over the same period.

The heavy rains caused two deaths in the province over the weekend. A 38-year-old woman surnamed Lee was swept away by a flash flood in Gapyeong at around 5 p.m. Saturday. A 57-year-old woman identified as Lee met a similar fate in Pocheon yesterday.

“While Seoul and its surrounding areas were under heavy rain during the weekend, the southern regions below South Chungcheong only had sporadic showers over a short period of time,” said the weather forecaster.


The agency said central regions were hit by less than 50 millimeters of rain. The monsoon front is stalled and the agency forecast that Seoul would continue to get rain through Saturday morning. Gangwon is forecast to have rain through Friday.

Southern regions, however, such as the Jeolla and Gyeongsang provinces, are expected to have rain only on Wednesday afternoon. Jeju Island was forecast by the weather agency to be free from rain all this week.

The agency expects some parts of Seoul, Gyeonggi and Gangwon to have heavy rain this morning. Seoul’s highest temperature will be 27 degrees Celsius and remain under 30 degrees tomorrow.