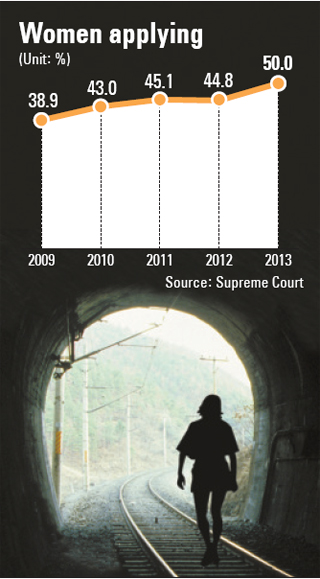 In 2004, the Individual Credit Rehabilitation Program was established in response to the dramatic increase in the number of delinquent borrowers.

Back then, credit cards were indiscriminately issued while unemployment rose. The government then stepped up its efforts to help out those suffering from high levels of debt.

The beneficiaries of this program can start over with a clean slate if they regularly pay back a fixed amount of their debt.

Last May, nine years after the program was established, there were more than 500,000 participants in the program, reflecting the widespread credit crisis.

The Individual Credit Rehabilitation Program was launched for salaried employees and business income earners soon to be bankrupt.

If they regularly pay a certain amount of money over three to five years, they will be excused from the obligation to pay back their full debt with a range of less than 500 million won ($444,740) worth of loans without collateral, or 1 billion won in loans with collateral.

In exchange for reducing the total amount of debt, the program requires the debtors turn in all of their potential income, excluding their cost of living.

A 28-year-old woman surnamed Jung got a job as a nurse at a hospital in Seoul in 2007 after she graduated college in Gwangju. Her job was intense but it paid her 2.5 million won a month, a salary not small for a recent college grad.

Her salary gave her sudden economic freedom. She got a credit card and used it to buy designer bags. The credit card made her feel as if she could afford anything.

But the joy didn’t last long. Her entire salary was soon in the hands of the credit card company. She couldn’t even pay her rent. She scraped by, overdrawing funds from her bank account and taking cash advances on the credit card. 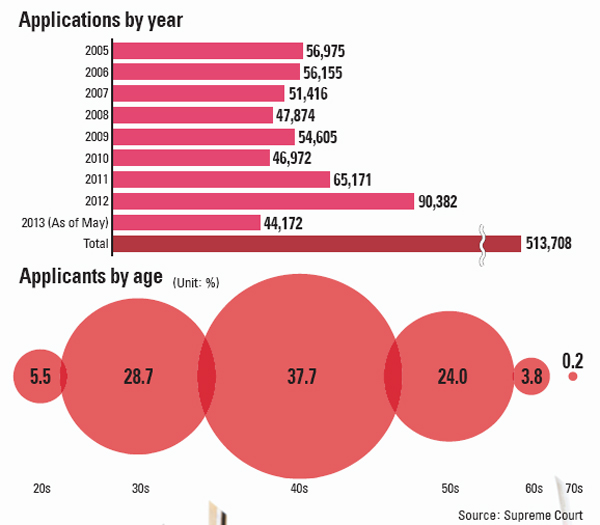 The situation worsened when her deteriorated health forced her to change her job to only day shifts. In 2008, when she moved to another hospital, her salary decreased to 1.5 million won. But it was too late for her to adjust to the new budget constraint. Credit card debt piled up with increasing overdue fees. Desperate, she even borrowed money from loan sharks. Debt of mere hundreds of thousands of won soon turned into 40 million won.

“I recklessly used my credit card and as a result I am in debt after living in Seoul for six years,” Jung said regretfully.

There is a dramatic increase in the number of applicants for the program, the last resort for those who cannot pay back their debt.

Last year, the highest number of 92,368 applicants was recorded and this year 44,172 people applied as of May.

The rehabilitation program is a credit recovery procedure through which small sum debtors can pay down their debt using their income minus their cost of living.

With help from the Korea Legal Aid Cooperation, the JoongAng Ilbo has investigated the socio-demographic background of 2,885 program participants who have applied for the program at the Court through Individual Rehabilitation and Bankruptcy Support Center of Cooperation from 2009 to last April.

Gender, age and income level were the main topics of the investigation.

The organization offers a free service to fill out the forms needed for the rehabilitation program application.

He added, “There are a lot of cases especially in which women in their 20s end up applying for the program because they start spending money recklessly after they get their first job at an earlier age than men. But these days, a lot of jobs don’t pay enough to afford such a consumption habit.”

A 26-year-old woman named Yoo got a job as a physical education teacher at a private institution right after she graduated from high school. With a salary of only 1.5 million won, she took out a credit card.

But problems arose when she took a leave of absence and changed jobs several times.

She exceeded her credit limit and had to borrow money from a deposit bank to pay back the credit card company.

The debt did not decrease, however, and continued to rise to more than 20 million won. She could not help but apply for individual rehabilitation.

“I ended up with a pile of debt because I thought I could just spend money easily. I would like an opportunity to reestablish myself as a self-reliant adult,” Yoo appealed.

According to Professor Lee’s analysis of the program applicant data and the Korean National Statistical Office’s Population and Housing Census, women in their 20s are 1.9 times more likely to apply for the program than males of the same age.

“In general, there was more possibility for males to apply to the program, but females in their twenties applied more than their counterparts,” Professor Lee explained.

There are many requests from women in their 20s because they often apply for credit cards while still lacking economic sense. Excessive consumption is often a central problem. In many cases for these women, debts from credit cards accumulate, from savings accounts and private loans, into a “pit of debt” that they can’t climb out of.

Average earnings for a woman in her 20s is 1.19 million won, falling short of the overall average of about 1.5 million won.

“There are many cases of women in their 20s who, despite lacking strong financial stability, overspend after receiving their credit cards,” said Cho Kyung-ae, a member of the Seoul Central District Court.

An average applicant for the program is a 43.6-year-old man with a monthly salary of approximately 1.5 million won. He needs 64.7 months (5.4 years) to pay off the average debt of approximately 87.9 million won, even if he uses all of his potential income.

Men in their 40s are mostly likely to be the beneficiaries of the program, considering the fact that they are the most economically active out of all the age and gender groups.

“Those in their 40s have a great amount of expenditure such as in child’s education and housing. If they lose their job or fail in their business and end up with heavy debt, often their economic status is not recoverable without this rehabilitation program,” noted attorney Kim Kwan-ki, a member of the Seoul Central District Court.

“The fact that an average applicant has an average monthly salary of 1.5 million won indicates that he is a temporary employee or daily laborer, thus incapable of supporting his family without help,” attorney Kim said.

An engineering work technician named Moon applied for the program after his business failed. Before he started up a business with his friend, he was earning a stable income of 3 million won per month at the engineering company.

Now he not only lacks a stable source of income, but he also carries a huge amount of debt. His partner company went out of business and he could not repay the 110-million-won loan won he borrowed to start his own business.

After struggling to support his family with the monthly salary of 2 million won and credit card cash service, he finally applied for the rehabilitation program last April.

The average amount of debt an applicant has at the point of applying to the program is showing a declining tendency. In 2010, it reached its maximum of 92.4 million won and last year it became 85.4 million won. It got even smaller this year with an average debt of 81.6 million won.

The percentage of interest is also declining. In 2009, 22.4 percent of the total debt was accumulated interest, but this year, interest only makes up 14.8 percent. As the program became widely known, more people began to apply as soon as they think their amount of debt is unmanageable.

Before one applies to the program, he or she often goes through a conventional phase of card shuffling, borrowing from deposit banks and then from a private loan company.

“Credit cards should not be issued to those with unstable income,” said Oh Moon-sik, a member at the Seoul Central District Court, adding “People should be educated from a young age that the money they spend with a credit card simply means debt.”