“Chicago” has been a timeless hit on Broadway and the West End. The Korean production of the musical premiered in 2000 and it instantly mesmerized Korean audiences with the casting of veteran singer Insooni in the role of Velma Kelly, a vaudevillian, and musical actress Choi Jung-won as the chorus girl, Roxie Hart. Since the second production of “Chicago” in 2007, Choi joined Insooni in the role of Velma Kelly and the two have been “the Korean Velmas” for all of the following productions of the musical, held every year except in 2011.

According to the production firm, Seensee Company, the “charm of the musical is witnessing how the veteran actresses Insooni and Choi Jung-won are able to express the different styles of Velma upon meeting different Roxie Harts.” 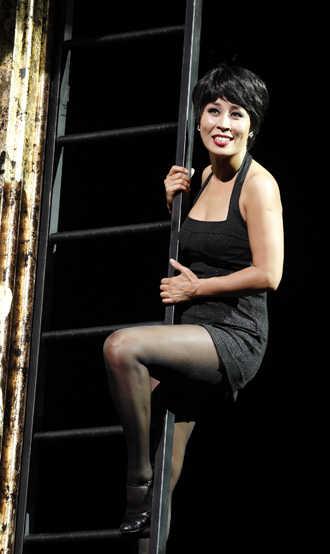 “There’s this freshness every time a different Roxie Hart joins in. I’ve been taking the role of Velma since 2007 so I’ve seen a lot of Roxie Harts,” said Choi. “For advice, I tell actresses cast as Roxie Hart to try to expose yourself as much as you can, rather than to hide yourself behind the character of Roxie Hart, because that’s the real charm of the character.”

Insooni, who saw Choi as Roxie Hart in 2000, commented that Choi’s version was “a lot more voluptuous.”

“When she was singing ‘Funny Honey,’ back then, we had a scene where she sings it lying on top of a piano. I was like, ‘wow, she’s charming,’?” said Insooni. “Roxie Hart is also charming these days in a different way. She’s more distinctive, and more attractive than voluptuous. I am just amazed every time how one character can be expressed such differently and in depth by different actresses.”

“The strength of the musical ‘Chicago’ is also the fact that the stage setting hardly changes and the actors hardly change costumes,” said Choi. “That way, you can really witness the actors’ acting, the facial expressions and the passion. You really get absorbed into us, not the showy glamor of what’s on the stage.”

For Lee, a former Miss Korea, it’s her first musical since “Legally Blonde” three years ago.

“I’ve always wanted to participate in the musical ‘Chicago.’ I am so honored to be a part of it this time,” said Lee last week. But she confessed she went through an “unexpected slump” while she was practicing for the musical. 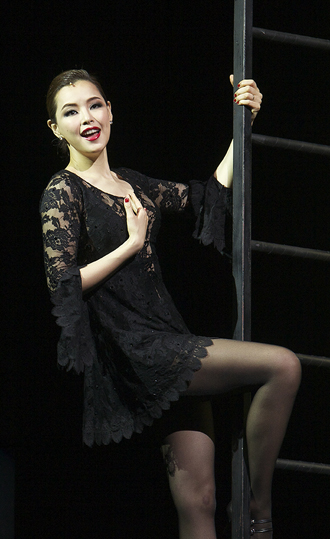 “I’ve never felt such a devastating slump before in my life before, but I felt it while I was practicing for ‘Chicago,” said Lee. “It was the role of my dreams, so I wanted to be the best. I practiced day and night and I guess I went overboard and got so exhausted that I couldn’t do anything. If I were smarter I would’ve known how to control myself and take time to rest, but the role of Roxie Hart just didn’t leave my head 24/7.” But Lee said that she was lucky to have veteran actresses by her side who could guide her to get up on her feet again.

While casting the same actors for consecutive appearances could be a let down for some theatergoers, Sung Gi-yoon, an actor who has been cast for the role of “Billy” for the third time, said, “Many actors and actresses have staged the show over and over again and we have to admit that we were somewhat busy trying to work on the dance moves and how it’s being ‘shown.’ But this time, it’s faithful to the inside. Those of us who took the roles many times know the roles inside out by now. So this version will be something more special for those who have already watched the show.”

The musical is based on a 1926 play of the same name by reporter Maurine Dallas Watkins about actual criminals and crimes she reported on in Chicago. The musical revolves around Roxie Hart, an ambitious chorus girl, who murders her lover in Chicago.