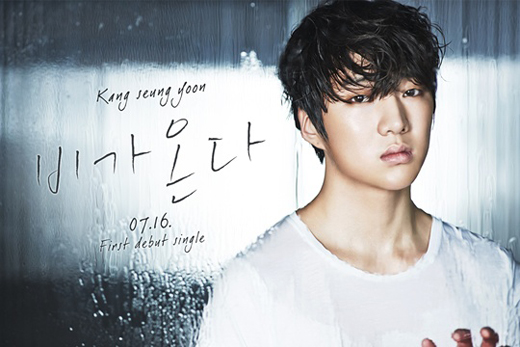 Kang Seung-yoon, a former contestant on the survival audition program “Superstar K2” on cable channel Mnet, will debut on the music scene with the release of a song, “It’s Raining,” today at noon, according to his agency, YG Entertainment.

Kang released a teaser image of the upcoming song yesterday in which he looks sad with what appears to be wet hair.

The release of “It’s Raining” was never announced until yesterday. Instead, another song, “Wild and Young,” was scheduled to be released yesterday but it was delayed by two weeks.

The agency said that the delay is because of the continuing monsoon rains.

“The rock-genre song, ‘Wild and Young,’ fits well with the shouting vocal sound of Kang and the hot summer season,” said YG Entertainment.

“As rainy seasons continue, we’ve decided to release the song, ‘It’s Raining,’ first and then to release ‘Wild and Young’ at the end of July when the hot summer season starts.”

The agency is also thinking about having Kang go on TV to promote the song, after originally announcing that he wouldn’t do so. He will start having some appearances starting in early August to late September.

The mini-album is scheduled to be released in early September.

YG Entertainment previously said that Kang is part of one of two new boy groups the agency is training. After a competition, one of the yet-to-be-named groups will be named “Winner.”

If Kang’s group wins the competition, Kang will also appear as part of the group starting early October.