The bravest warhorse of Korean War gets her due

The bravest warhorse of Korean War gets her due 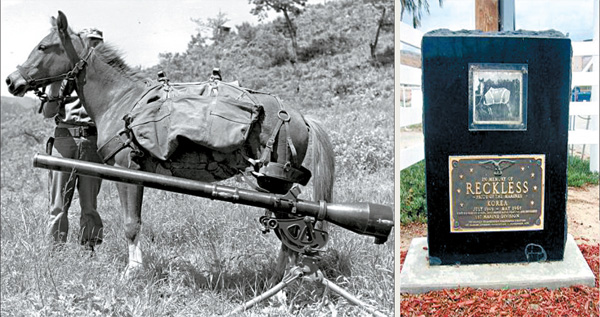 Morning Sun, the most famous warhorse of the 1950-53 Korean War, joined the U.S. Marines in October 1952, in the middle of the war. Her job was to deliver weapons and ammunition to soldiers on the battlefield as the bullets and shells flew.

No one could foresee how well she would do that job.

Morning Sun’s deliveries saved many lives on the frontlines, and she was constantly in mortal danger. It was a grueling life for an animal as deafening explosions erupted around her. But she persisted with her job, sometimes even going back and forth all by herself.

She did her work with such little regard for her own safety that her fellow Marines nicknamed her Reckless. She was brave to the point of recklessness. Eventually, the nickname stuck.

Her fearlessness was continually reported to the division commander. After the war, the U.S. government granted her a myriad of awards such as a Purple Heart (a medal given to soldiers who are injured), a Presidential Citation, a U.S. Department of Defense War Medal, a United Nations Korea Medal and more.

No ordinary soldier, Reckless the warhorse was a hero of the Korean War whose heroics have gone down in U.S. Marines Corps history. Now, a memorial has been built as a tribute to her contributions as a Marine.

On July 26, to commemorate the 60th anniversary of the armistice that ended the Korean War, the U.S. Department of Defense will hold a dedication ceremony for the Sgt. Reckless Memorial at the National Museum of the Marine Corps in Quantico, Virginia.

A statue of Reckless will be unveiled.

According to the U.S. Department of Defense, high ranking officials are planning to attend the event and a military band and honor guard will also be present.

Memorial ceremonies are going to be held across the nation.

Before the outbreak of the war, Reckless was a racehorse in Sinseol-dong, central Seoul.

At that point, she began her new job on the frontlines in mountainous areas.

Reckless went on to deliver hundreds of tons of ammunitions, making a total of 386 round trips between supply bases and the frontlines.

The heaviest fighting she experienced was at the battle of Yeoncheon, as U.S. Marines clashed with the 120th Division of the Chinese Air Force in March 1953.

After the signing of the armistice on July 27, 1953, the U.S. Department of Defense sent Reckless to America. She was famous before she got to her new home. Stories about her appeared in magazines like the Saturday Evening Post. Life listed her, along with George Washington, Thomas Jefferson, Abraham Lincoln and John Wayne as one of the world’s 100 greatest heroes. There is a Web site dedicated to her: www.sgtreckless.com.

In an unprecedented move in 1959, Reckless was promoted to sergeant and awarded with a Good Conduct Medal. After being discharged in 1960 with a grand ceremony, Reckless died in 1968. The Marine Corps gave her a war hero’s funeral.