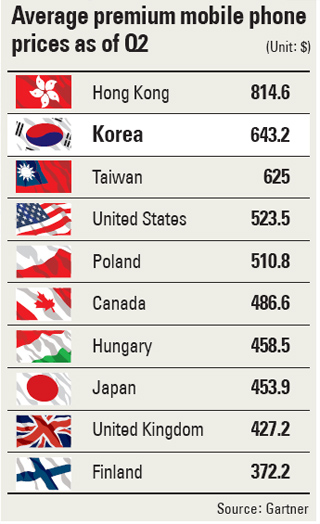 The Seoul branch of the Young Men’s Christian Association (YMCA) has asked the Fair Trade Commission, an antitrust body, to investigate whether Samsung Electronics is abusing its market dominance to maintain higher prices for its smartphones here than abroad.

Citing a June report from U.S. market researcher Gartner, the civic group claims a domestic market share of more than 60 percent establishes Samsung as the “dominant player” and could make a case that the world’s top smartphone producer is responsible for devices costing more in Korea than in other developed countries, including the United States and Japan.

The Korean YMCA is known for civic activism and the Seoul branch gets involved in consumer protection issues.

According to Seoul YMCA, Samsung has set smartphone prices above 900,000 won ($803) in recent years and the pricing has affected minor players, including LG Electronics and Pantech.

Even though the FTC last year slapped a fine of a combined 45.33 billion won on three mobile phone producers and three mobile carriers (14.28 billion won on Samsung) for inflating the price of handsets at the time of release and then offering hefty subsidies to make customers believe they were getting good discounts, that penalty did not lead to a drop in phone prices, Seoul YMCA added.

“Even after it was evidently revealed that smartphones’ excessively high factory prices are problematic, prices have not been adjusted lower,” it said in a statement.

“Under the domestic market situation where the dominance of Samsung has nearly driven out foreign-made handsets, Korean consumers may have been blocked from having a chance to choose from a variety of products at different prices.”

Should media reports and market research data showing Samsung with a smartphone market share of between 60 and 70 percent in Korea be correct, the law on monopoly control and fair trade would apply to the company, said the organization, requesting a probe into the statistics.

If Samsung has a market-dominant position, the FTC should look into whether Samsung took advantage of that position to “unfairly” set, maintain or modify product costs or service fees, Seoul YMCA added.

According to a June 18 report from Gartner titled “Forecast: Mobile Phones, Worldwide, 2010-2017, 2Q13 Update,” Korean premium mobile phones cost in excess of $100 more than those sold in the U.S. and Japan, home turfs of Apple and Sony.