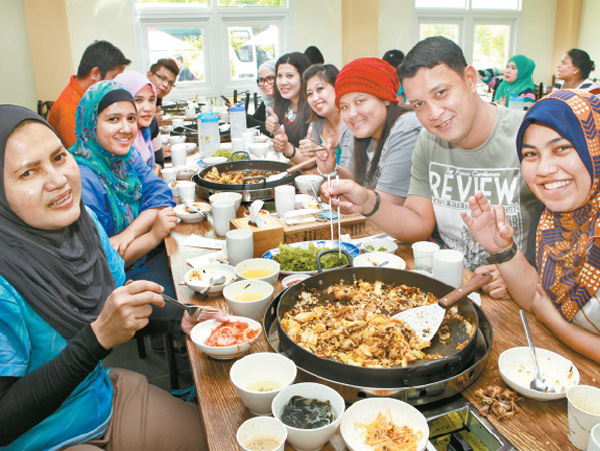 An ordinary restaurant in Gapyeong, Gyeonggi, looked a lot less ordinary recently when 67 Malaysians, some garbed in hijab of different colors, enjoyed lunch there. They ordered roasted chicken with rice, which was prepared in accordance with Islamic law.

At first thought, a halal restaurant would appear to be totally unnecessary in Korea, where Muslims account for a minuscule 0.08 percent of the population, according to the Korea Muslim Federation.

But halal is the trend among restaurateurs catering to a rising number of Muslim migrant workers from countries such as Indonesia, Bangladesh and Malaysia, and tourists from the rich Gulf states and Southeast Asia.

Halal restaurants were concentrated in Itaewon near the country’s largest mosque, with a few more in Sinchon and Dongdaemun catering to foreign workers.

Now, they are spreading out of Seoul and the traditional center of the expat community.

Seven halal restaurants are now operating in Gangwon and five in Gyeonggi.

Muslim visitors say Korea’s halal dishes are a bit different to what they are used to.

“I think the way the chicken is slaughtered will be the same,” said Azhar Mustapha, one of the 67 Malaysians who visited Nami-ok, the restaurant in Gapyeong, Gyeonggi. “But the sauce is a little different. It’s a bit spicy but really nice. We don’t usually use these small pieces of cabbage and seaweed.”

“This halal dish tastes really healthy,” said Rosewani Che Taib, another member of the group. “I’ve been taking part in halal tourism in different countries like Vietnam, but Korean food is more delicious. The food is prepared in a simple way but it’s still very nutritious.”

Jang Chang-rim, the owner of Nami-ok, thought it would be impossible to find a local halal butcher so he turned to a butcher shop in Itaewon.

“I regularly go all the way up to Itaewon to get halal-processed chickens,” he said. “It costs much more than ordinary chicken and I have the transportation charges too.”

But a halal menu opens up an entirely new clientele.

“I opened this restaurant in March,” he said. “At the time, there weren’t many customers because Korean people aren’t accustomed to this food and Muslim tourists were directed to restaurants in Seoul.”

Things started to change after the Korean Tourism Organization started publicizing Jang’s establishment in its efforts to boost Muslim tourism.

“Now, at least two to three tour groups visit per week,” Jang said, “and I get telephone inquiries almost daily.” The Korean Tourism Organization encouraged Jang to build a prayer room for the faithful. And he did.

“The Muslims said it’s really convenient for them and they appreciate our consideration,” he said. “I never thought I could run a restaurant for Muslims but one day my older sister said the halal food industry has great business potential due to the significant number of believers.”

The number of Muslim tourists coming to Korea drastically increased to 508,099 last year from 276,826 in 2010, according to the Korea Tourism Organization. The rising number prompted the state-run tourism agency to embark on different projects to better serve them.

In 2007, the agency helped Everland Resort in Yongin set up a prayer room and it has since expanded the number of such rooms. Many Muslims perform prayers five times a day.

Five major tourist attractions including the Korean Folk Village in Gyeonggi and Skinanniversary Beauty Town in Paju, a beauty spa, have prayer rooms.

“We consider Muslims an important target market because they have a large population around the world,” said Baek Gwang, an official of the Korea Tourism Organization.

There are 1.6 billion Muslims in the world, 23 percent of all people, according to the U.S.-based Pew Research Center. And 62 percent of all Muslims reside in the Asia-Pacific region.

“We constantly seek to penetrate the Indonesian market by participating in travel fairs because the country is becoming a kind of a captive market of ours,” the official said. “More and more people from Indonesia and Malaysia come to Korea, especially attracted by K-pop.”

“We will also add foot-washing facilities in some tourist destinations for Muslims,” she noted. Many Muslims wash their faces, arms, head and feet before prayers.

Nongshim launched Halal-certified ramen for Muslims in 2011. Nongshim established a production line for halal-certified noodles in Busan in April 2011 to produce ramen that contains no meat.

Now the product is exported to such countries as Pakistan, Jordan and Qatar.

Other food giants such as CJ produce steamed rice, dried seaweed and kimchi in accordance with Halal practice and earned certifications from the Malaysian government.

In Korea, the Korea Muslim Federation has the job of awarding Halal certification to restaurants, markets and hotel dining facilities that comply with Islamic standards.

In March, Hanyang University in Seoul launched a halal food cafeteria on campus for local university students as well as Muslims.

“We have some 100 Muslims on our campus,” a representative of the university said. “We thought this restaurant will mainly serve the Muslims but Korean students also come for Halal food.”