On and off acquisition tax cut is on again

On and off acquisition tax cut is on again 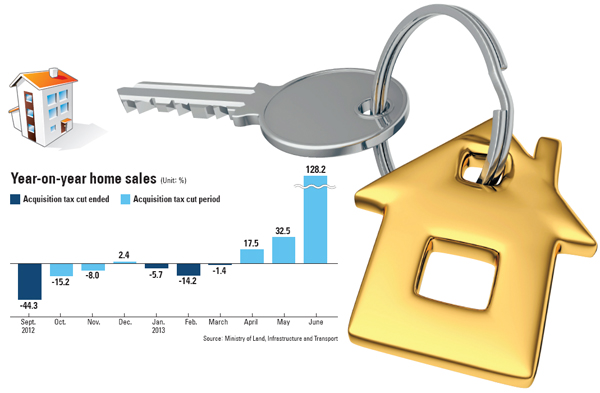 The government has finally made up its mind to cut the nation’s acquisition tax rates for a yet-to-be-determined period in order to revive the housing market that has deteriorated since a temporary 50 percent cut in the tax rate ended last month.

At a joint press conference yesterday, the Ministry of Strategy and Finance, the Ministry of Land, Infrastructure and Transport, and the Ministry of Security and Public Administration announced the government agencies are currently in talks to review measures to reduce the acquisition tax rates, possibly permanently.

The final measure will be announced at the end of August.

“It won’t be temporary tax cuts, though we can’t say at the moment how long the measure will last,” said Kim Nak-heo, director general of the tax policy bureau at the Finance Ministry.

It is the first time the government has directly addressed the issue. The acquisition tax, among others, is considered an effective tool to regulate the housing market, since the tax rates determine how much consumers must pay in a transaction.

Many experts and consumers have wanted the acquisition tax cut, which expired on June 30, to be resurrected.

However, the government has been staunchly maintaining its stance that there will be no tax cut extension, because the acquisition tax is a major source of revenue for the provincial governments.

The related branches of government are considering a plausible measure to reduce current tax rates. The reduction rate could be as large as 50 percent.

The ministries also are considering ways to adjust the standard home price for taxation and to apply a lower rate to owners of one house than those with many.

For those who bought houses or who are planning to buy houses this month before the rates go down, the government won’t be able to apply any reduction in tax rates retroactively to them.

This doesn’t help ease worries about a looming transaction cliff in the housing market until September when the law will be revised.

According to Kim Kwang-seok, a research fellow at Hyundai Research Institute, after the tax cut ended, housing transactions began to fall this month.

“If the current decline in sales continues, the market would experience the so-called ‘transaction cliff,’?” Kim said.

Cuts in acquisition tax rates have had a direct impact on the number of home transactions. Statistics show that the housing market fluctuated in tandem with the absence of government policy to temporarily slash the rates since last September, when the Lee Myung-bak administration announced its last-ditch measure to halve acquisition tax rates until the end of 2012.

According to the Land Ministry, year-on-year growth in home transactions nationwide fell 44.3 percent last September without the tax cut, but reversed itself from October through December after the acquisition tax cut was reinstated.

The rebound ended in January, after the tax cut expired. However, after it was resurrected by lawmakers in March, transactions picked up again from April through June.

The spike in sales was believed to be connected to the end of an acquisition tax cut, which expired as of June 30. If the government cuts the rates, it will have to find ways to make up for shortfalls in the tax revenue of local governments.

“There will be more detailed discussions on such measures, but the current government’s principle is not to raise any tax rates,” said Kim.

According to the Security Ministry, the acquisition tax accounts for an average of 26 percent of the annual tax revenue of local governments throughout the country.