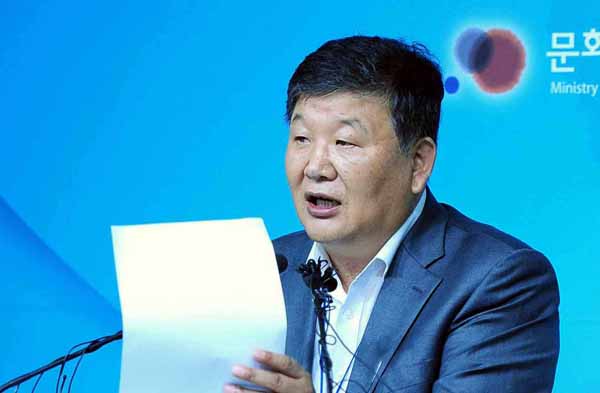 Noh Tae-gang, director of the sports bureau of the Culture Ministry, vows not to offer financial assistance to Gwangju’s hosting of the 2019 FINA World Aquatics Championships yesterday in Seoul.[NEWSIS]

The Ministry of Culture, Sports and Tourism yesterday asked the Gwangju District Prosecutors’ Office to investigate the city’s forging of signatures of key government officials in its bid to host the 2019 FINA World Aquatics Championships.

On Friday, the ministry revealed that Gwangju had forged the signatures of former Prime Minister Kim Hwang-sik and former Culture Minister Choi Gwang-sik on pledges of financial support for the games in its bid.

Hours later, FINA announced that Gwangju had been selected as the host for the international sporting event. Gwangju refiled its bid without the forged pledges in June.

The ministry also announced yesterday that the central government would not offer any financial assistance for the games.

“This kind of forgery is unprecedented,” said Noh Tae-gang, director of the ministry’s sports bureau, yesterday during a press briefing. “We take this case very seriously. We reported to the bidding committee that the central government will not fund the event right after [the government] detected the forged signatures.”

“All of this started with an official’s mistake, but I deeply apologize and I will be cooperative in the investigation,” Mayor Kang said yesterday.

But he asked the government to change its mind on financial support.

“Prime Minister Chung Hong-won assured us in May that the central government will support the swimming event as passionately as it can,” said the mayor. “I believe the government won’t go back on their words.”

The central government insists that following the scandal it will spend nothing on the event.

“The FINA Aquatics Championships is a recognized international sporting event,” Noh said yesterday. “If Gwangju works hard on its marketing, it can raise 5.5 billion won on its own.”

And the ministry said the central government will be more cautious about lending financial support for sporting events in the future.

“We will apply tighter reviews on future host cities to make sure they have the means and financial capabilities to actually stage competitions.”