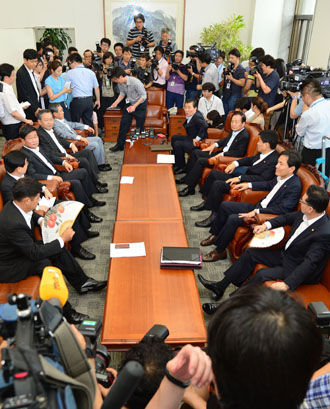 Lawmakers from the ruling and main opposition parties meet yesterday in the National Assembly to discuss the missing summit transcript.[NEWSIS]

The ruling and opposition parties concluded yesterday that the National Archives does not have the original transcript of a controversial summit meeting between the leaders of the two Koreas in 2007.

The two parties ended a weeklong search for the document at the National Archives yesterday and a group of 10 lawmakers concluded that the transcript of a dialogue between President Roh Moo-hyun and North Korean leader Kim Jong-il was not there.

“We have used all possible search methods but failed to find the transcript,” Representative Hwang Jin-ha of the Saenuri Party told before the committee. “We concluded that the National Archives is currently not in possession of the transcript and the ruling and opposition parties agreed with that conclusion.”

Representative Woo Yoon-keun of the Democratic Party said the lawmakers found serious problems with the National Archives’ management of presidential records and as a result they were unable to conclude if the transcript was once stored in the archives and disappeared or whether it was never stored there.

Since last October, the parties have been battling over claims that Roh disavowed the Northern Limit Line, the de facto western maritime border, in his closed-door meeting with Kim during the inter-Korean summit in Pyongyang in 2007.

The National Intelligence Service, which kept an audio recording of the conversation and a copy of the transcript, further fueled the controversy last month by declassifying the transcript and disclosing it.

According to Kim Man-bok, former director of the National Intelligence Service, the Blue House kept the original transcript of the dialogue and gave it to the National Archives after Roh’s term ended, while his agency kept a copy of it and the audio recording.

On July 2, the National Assembly took the unprecedented step of allowing the 10 lawmakers’ access to the sealed presidential records at the National Archives. The search began on July 15.

A bipartisan group of lawmakers made a final attempt to locate the transcript yesterday morning. Representatives Hwang and Cho Myung-chul of the Saenuri Party and Representatives Jeon Hae-cheol and Park Nam-choon of the Democratic Party, accompanied by four experts, conducted the search for about two hours and 40 minutes.

The Saenuri Party, which suspects that the transcript was never sent to the National Archives - possibly on Roh’s orders - said a probe by the prosecution is necessary to end the controversy.

“Based on what happened until now, the situation points in the direction that it is not there [in the National Archives],” Representative Choi Kyung-hwan, floor leader of the Saenuri Party, said yesterday in a party leadership meeting. “It is a grave situation undermining the country’s foundation if the transcript is proven to be missing.”

Choi yesterday dismissed the Democrats’ demand to prolong the lawmakers’ search. “The politicians have no investigative authority, so it is hard to expect an outcome by extending the search period. We must lay bare how it went missing through a prosecution’s investigation.”

Representative Suh Sang-kee of the Saenuri Party, who heads the Intelligence Committee of the National Assembly, said in a radio interview that the party leadership is making preparations to ask the prosecution to step in. He said all possible methods including an independent counsel’s probe should be used to solve the mystery.

The Democratic Party also said yesterday a probe is needed but with a different target.

The Democrats also raised the suspicion that the transcript was destroyed during the Lee presidency.

“Since March 2010, at least two unauthorized accesses to the sealed presidential archives were made by the Lee government,” Chun said. “We have no choice but to wonder what happened at the National Archives over the past five years. Are the archives a Bermuda Triangle?”