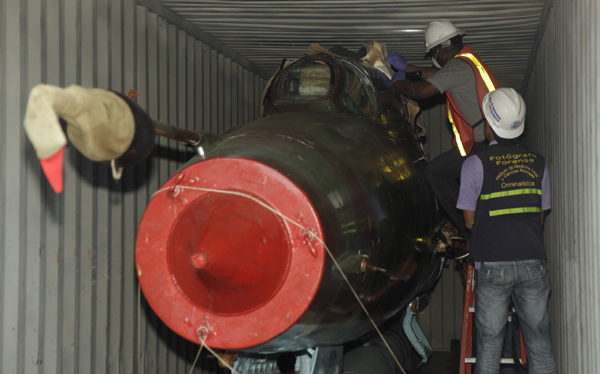 COLON, Panama - Panamanian investigators unloading the cargo of a seized North Korean ship that carried arms from Cuba have found the two MiG-21 fighter jets the Cuban government had said were on board, the government said on Sunday.

Alongside the two planes, originally produced by the Soviet Union in the late 1950s, officials found two missile radar systems on board the Chong Chon Gang, President Ricardo Martinelli told reporters in the Atlantic port of Colon.

The discovery, which included cables and electrical equipment, was made inside containers on the ship Panama had feared might contain explosive material. None was found.

After stopping the vessel bound for North Korea last week, Panama revealed it had found weapons in the cargo hold late on Monday.

In response, Cuba said the shipment contained a range of “obsolete” arms being sent to North Korea for repair.

Panama has asked the UN Security Council to investigate the ship and its contents amid suspicion that the vessel is in breach of a wide-ranging arms embargo on North Korea for its nuclear and ballistic missile program.

“One can’t take undeclared weapons through the Panama Canal below other cargo,” Martinelli said, adding that he had not spoken personally to any Cuban officials since they first asked for the ship to be released last Saturday.

Javier Caraballo, Panama’s top anti-drugs prosecutor, said the planes gave off a strong odor of gasoline, indicating that they had likely been used recently. So far, Panama has not found anything not on the Cubans’ list of ordnance, he added.

The UN team is expected to arrive in early August once Panama has finished unloading the 155-meter (510-foot) ship.

The weapons were hidden under thousands of sacks of sugar on the freighter. Before the arms were discovered, Cuba told Panama the cargo was a donation of sugar for the people of North Korea.

The isolated Asian nation has asked Panama to release the ship and its 35-member crew, who were arrested and charged with attempting to smuggle undeclared weapons through the canal.