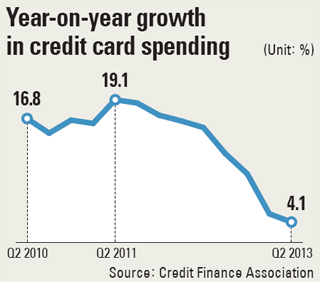 Credit card spending in the second quarter grew at the lowest rate in eight years, according to data released yesterday.

According to the Credit Finance Association, plastic card use from April to June was 135.9 trillion won ($121.7 billion), up 4.1 percent compared with the same period last year. The growth rate is the lowest since 2005, when the association began compiling card-spending data.

“Consumers are definitely spending less due to the stagnant economy,” said an official from the association. Overall consumer spending has been declining since 2011, when the first-quarter figure dropped 0.4 percent compared with the previous quarter.

“It also seems consumers are no longer finding it beneficial to use plastic cards [over cash] because of less service,” the official added.

There have been concerns that the Park Geun-hye government’s aggressive push to normalize the underground economy by going after possible tax evaders has led consumers to prefer cash payments to reduce their taxes.

Based on association figures, the rate of growth in plastic card spending has been stagnant since the second quarter of 2011, when year-on-year increase in usage was 19.1 percent.

In the second quarter of this year, card spending at duty-free shops, luxury hotels and travel agencies dropped as consumers continued to tighten their belts.

Meanwhile, of the total volume of credit card usage in the second quarter, the highest share went to restaurants followed by gas stations, online commerce and large discount stores.