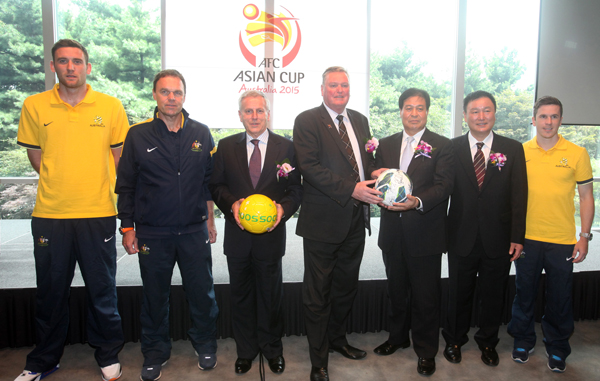 Australian Ambassador to Korea, Bill Paterson (third from left) welcomes the national football team to Korea Monday. Provided by the Embassy of Australia

The Embassy of Australia hosted a reception Monday welcoming the country’s national football team to Korea, having come for the four-nation East Asian Cup.

The event also showcased the official logo of the 2015 AFC Asian Cup, which will be hosted by Australia, and highlighted the close links between Australia and Korea.

“Australia has a long and proud history of playing Korea in football, starting in 1967,” said Bill Paterson, the Australian Ambassador to Korea. “And with Korea currently performing so well on the international stage, we expect they will be a powerhouse in the Asian Cup in Australia in 2015.”

Australia and Korea played to a 0-0 draw in the opening men’s game of the East Asian Cup on Saturday.

Ambassador Paterson emphasized that Korea holds significance as a trading partner and the Asian Cup could further boost that relationship.

“Korea ranks third globally for Australian exports, and is one of Australia’s top 10 import partners, so the relationship is extremely important,” he said.

“There are also more than 150,000 Australian residents of Korean descent, so we are expecting strong and vocal support from them,” Brown said. The ambassador and organizers alike stressed the importance of hosting the football competition.

The 2015 AFC Asian Cup will be the first time the tournament has been held in Australia, as well as the largest football event the country has ever hosted.

“This presents an outstanding opportunity for Australia to strengthen our cultural, social and economic ties with Asia, including some of our most important partners like Korea,” Brown said. “We’re expecting upward of 45,000 international visitors and we hope Korean fans will start planning to come to Australia in January 2015.”

Korea has already qualified for the AFC Asian Cup Australia 2015 after coming third in the 2011 AFC Asian Cup. Matches in the 16-nation tournament will be played in five major cities: Sydney, Melbourne, Brisbane, Canberra and Newcastle. The Asian Football Confederation represents 46 nations in the region, comprising half the world’s population.

During the presentation, embassy officials underlined Australia’s expertise in architecture, as shown in the stadiums being built for the games.

The ambassador added that Australia is also anticipating Korea’s hosting of the Winter Olympics in 2018.

“Given this proven track record in major sporting events, Australia is an ideal partner for Korea in its preparations for the Pyeongchang 2018 Winter Olympics,” Ambassador Paterson said.