Foreign players get their shot in KBL

Foreign players get their shot in KBL 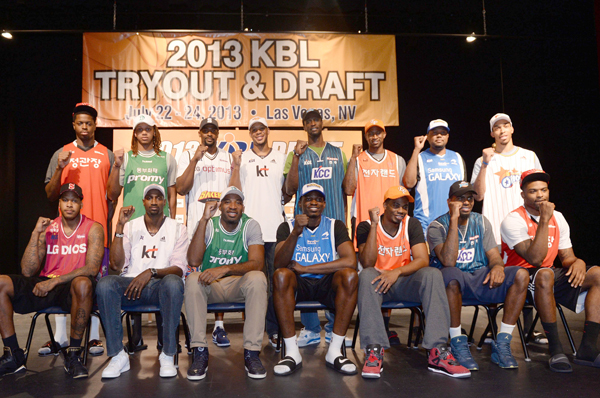 Herbert Hill found a new Korean home with the Wonju Dongbu Promy as the 28-year-old center returns as the No. 1 draft pick for the 2013-14 Korean Basketball League.

The KBL drafted 15 foreign players yesterday in Korean time, after a pre-season tryout in Las Vegas. A total of 110 players participated in the two-day tryout.

The Promy used its top draft pick on Hill, who has played three seasons in the KBL. Standing 202.8 centimeters tall and weighing 106.4 kilograms, Hill made his KBL debut with the Goyang Orions in 2009 and received the best foreign player award with the Incheon ET-Land Elephants in the 2010-11 season. He renewed his contract with the Elephants for the 2011-12 season and averaged 21 points and 10.7 rebounds, leading the team to the second round of the postseason.

With the Elephants, Hill was part of a formidable “Seo-Tae-Hill Trio,” the three pillars of the Incheon franchise who have all left the team. Seo Jang-hoon, the league’s all-time leading scorer, retired after the 2012-13 season and Moon Tae-jong is now playing for the Changwon LG Sakers.

After the draft, Hill said that he hopes to help the Promy to win the 2013-14 season, and expressed expectations of playing with Dongbu’s two towers, Kim Joo-sung and Lee Seung-jun. The Promy finished seventh in the 10-team league last season.

Lee Chung-hee, Dongbu’s head coach, said that Hill was on his watch list before the tryout, although he was below Chris Williams, who led the Ulsan Mobis Phoebus to win the regular season twice during his two-year stint with the team between 2005 and 2007. “Chris Williams did not attend the tryout, so I selected Hill with no hesitation,” Lee said. Williams, 33, also played with the Goyang Orions in the 2011-12 season.

The 2012-13 season winner Mobis and the runner-up Seoul SK Knights re-signed their foreign players - Ricardo Ratliffe and Rodrique Benson for the Mobis, Aaron Haynes and Courtney Sims for the Knights. Leon Williams re-signed with the Orions.