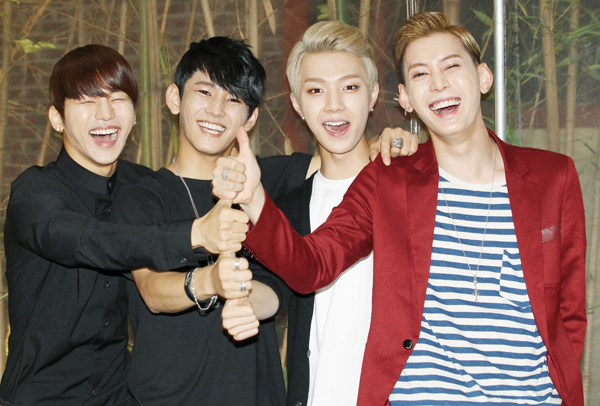 From left, the members of My Name: Insoo, Seyong, JunQ and Gunwoo. The fifth member, Chaejin, is not pictured. [JoongAng Ilbo]

Boy K-pop group My Name is still finding its way, nearly two years after it was unveiled by Hwanhee, one half of the famous duo Fly to the Sky.

Since My Name’s debut on June 2011, the group has actually concentrated its efforts on Japan, with its first full-length album, “We Are MyName,” reaching No. 3 on the Oricon album chart after its release in March. Already My Name has 10,000 members in its Japan fan club.

In Korea, things are moving slower, but with a new album that came out earlier in July, My Name is hoping to change that.

“We are about to celebrate the second anniversary since our debut, so we are determined to fire up our fans,” said the group to Ilgan Sports, an affiliate of the Korea JoongAng Daily. Chaejin, the band’s fifth member, was unavailable.

Q. Do you think that you are popular in Japan?

A. We know that we have many fans there, however, we have not really felt it yet.

How are Japanese fans different from Korean ones?

We don’t think they are that different. We are touched, though, when we see a fan who can do the same cheers as our Korean fans.

What was the happiest moment since your Japanese debut a year ago?

One time, we were waiting to perform, when one member of a famous Japanese girl group gave us a letter. It felt good.

When were you most discouraged?

There were a lot of times when we felt lonely. Other times, when we gave interviews with 24 different media outlets in one day, we almost felt like robots. We didn’t even have time to eat. But, later on, we learned that the big interview series was arranged for our sake - in Japan, we stay in one place and the reporters come to us all at once. In Korea, usually we have to visit the reporters for our interviews. So once we realized that, we were very thankful.

Did you film a movie in Japan?

Yes, the Japanese movie we filmed will be released in the winter. We are excited to see how it comes out. We all whined that [filming] is too difficult and tiring, but it was an interesting experience.

What did you think about making it to No. 3 on the Oricon chart?

We wanted to do more to make it to No. 1. And we also want to perform at the Tokyo Dome.

You once said that not being able to sleep enough is the most difficult part of your job. Do you still feel that way?

Although we don’t get to sleep much, we now know how to manage our sleep. We got used to it. We have grown the ability to keep in top condition with only two or three hours sleep.

In what area do you feel you need to improve?

We get startled when we see other singers who have made their debut after us and do better and better. It is partly because we do a lot of work in Japan. We can attract about 3,000 fans to a concert when we promote the event really hard in Japan, but other idols who have garnered popularity in Korea first then come to Japan for a concert and easily gather 5,000 people. We get anxious as we work in Japan.

Some say you haven’t done well in Korea. Do you think that the public here might not know My Name?

It depends on how you think about it. We also understand that we haven’t been active in Korea, as we have focused on working in Japan. But I think we were able to have some success in Korea thanks to our work in Japan. Sometime we feel sad that success or failure is decided based on how often we make appearances [to the public]. What you see isn’t everything.