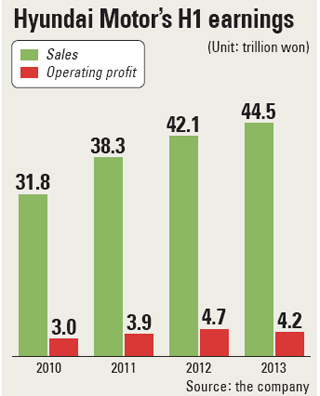 Hyundai Motor announced yesterday that its profits decreased in the second quarter despite an increase in sales.

“The volatile won-dollar currency rate stabilizing in the second quarter, the productivity improvement at overseas plants and the sales increase with enhanced brand value led to a better result than in the first quarter,” the company said in a statement.

Hyundai sold a total of 2,390,919 vehicles worldwide from January through June, up 9.5 percent from a year ago.

Hyundai said first-half revenue increased 5.8 percent year-on-year to 44.55 trillion won as its affiliate Hyundai Kefico was included in the consolidated financial account. However, operating profits slipped 7.7 percent year-on-year to 4.27 trillion won due to weekend production disruption from March to May, increased labor costs and a massive recall.

As a result, the ratio of operating profit to sales also dropped 1.4 percentage points to 9.6 percent in the first half. Net profit also dropped 7.8 percent to 4.61 trillion won, compared to a year earlier.

For the remainder of the year, the automaker said it is concerned about possible slowing of demand in China and the United States if the Federal Reserve begins to taper its quantitative easing.

“It is also expected that we are to have more fierce competition against Japanese automakers that are backed up by the weakened yen,” the company said. “The domestic market will also continue to have a difficult time due to imported cars’ aggressive marketing and price competitiveness.”

Hyundai Motor Group Chairman Chung Mong-koo met with about 60 executives in charge of overseas branches last week and ordered them to keep up the growth with preemptive measures.

For China, the world’s largest auto market, the company will focus on sales of localized models and expanding its sales network to small cities. In the United States and emerging markets, the automaker will boost marketing.

Meanwhile, Hyundai said it will continue efforts to bolster SMEs.