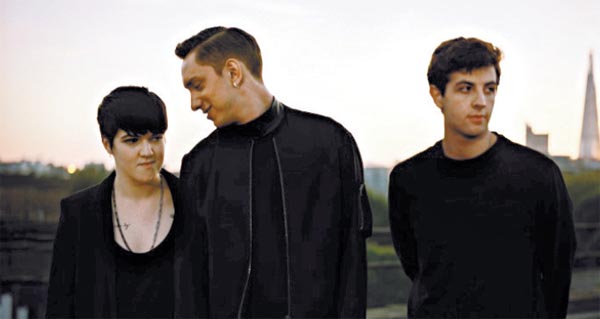 English indie rock group xx headlines the second stage at the opening night of the Ansan Valley Rock Festival on Friday. Provided by the organizer

With two successful albums, the English band the xx was picked by the Ansan Valley Rock Festival, held last weekend in Korea, to headline the festival’s second stage on the opening night.

While the xx have been critical darlings since its 2009 debut, what really raised its profile in much of the world was getting selected for the soundtrack of Baz Lurhmann’s “The Great Gatsby,” playing the eerie music that ends the film.

The band members say they were as surprised as anyone when they were approached by Luhrmann.

“He approached us as a fan and we were also a fan of his ‘Romeo + Juliet’ so we were very excited to have the opportunity,” said the band members in an e-mail interview with the Korea JoongAng Daily.

“We really enjoyed working with an orchestra. You can convey so much emotion with so many textures. I’d definitely like to do it again.”

The xx, which consists of Romy Madley Croft, Oliver Sim and Jamie Smith, rose to stardom with its debut album, “XX” in 2009, and found more success with its follow-up effort “Coexist” in 2012.

“We made our first album when we were 18 and spent almost two years touring the world with it,” wrote Sim. “When we got back home, we got to live life as our friends did, like move out of home, do normal things.”

With “Coexist,” the xx’s style changed a little, getting more club-like.

“We thought that we would take more of a break than we did, but we started writing again as soon as we got back really. I realized that this isn’t something I just do for a job, it’s my hobby as well. So I couldn’t sit around and not make music. We took our time to get the record right. We set up our own studio and recorded it all ourselves, with Jamie engineering and producing, with no pressure to get it out at a certain time.”

According to the band, the title of their second album, “Coexist,” has several meanings.

“One is that the xx music is a combination of our three tastes coexisting together,” wrote Sim. “Another is a reflection on present and past relationships and how we coexist with one another.

“The word came from our research into artwork, when oil and water come together they create a beautiful effect, rather than mixing they peacefully coexist.”