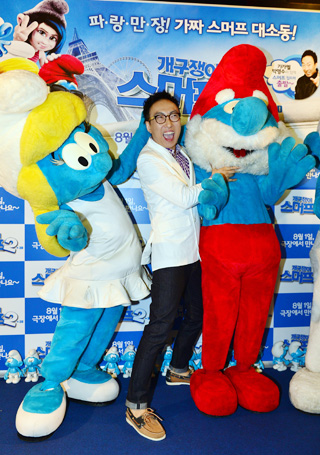 Comedian Park Myung-soo poses with Smurfs at the premiere of the family movie “The Smurfs 2” at Lotte Cinema’s Yeongdeungpo branch in southwestern Seoul yesterday. Park voices the villain Gargamel in the American movie’s Korean-dubbed version. Park also voiced Gargamel in the dubbed version of “The Smurfs” in 2011, based on the famous Belgian comic and TV animation series of the same title. “The Smurfs 2” will be released on Thursday. [NEWSIS]