On summer vacation with Korean presidents

On summer vacation with Korean presidents 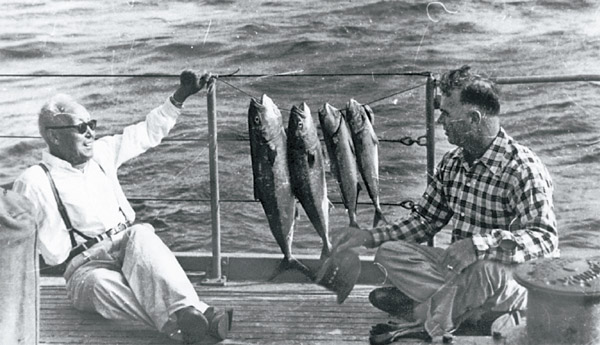 President Park Geun-hye begins her summer vacation today and will be off through Friday. It’s her first holiday since she took office.

Citing security, the Blue House refused to discuss the specifics of her plans.

Before her presidential victory, Park normally spent her summer vacations at home in Samseong-dong, southern Seoul. It’s possible she will remain in the Blue House during the week, according to officials.

Here’s a look at the summer vacations of presidents past.

Korea’s first president, Syngman Rhee, often spent his summers at a presidential retreat near the inter-Korean border. The compound is located in the coastal area of Hwajinpo, northern Gangwon Province. Strangely enough, near Rhee’s retreat is a private holiday house used by North Korean leader Kim Il Sung from 1948 until the Korean War broke out two years later.

Rhee built the small vacation home in Hwajinpo in 1954, shortly after the 1950-53 Korean War armistice, despite strong tensions with the North. He reportedly enjoyed fishing while observing the North.

The presidential retreat was demolished in 1961 after Rhee stepped down from the presidency. In July 1999, the Army rebuilt the house and it has been run as a memorial for the former president since 2007.

Former President Park Chung Hee, Park Geun-hye’s father, is remembered as a leader who enjoyed family vacations in natural settings. He spent summer holidays at Jeo Island in Geoje, South Gyeongsang. The island is known for its scenic pine trees near the beach.

In 1972, Park made a plan to visit the island and ordered the presidential security service to renovate a wooden cottage there. When Park arrived there, he found that a completely new house had been built. 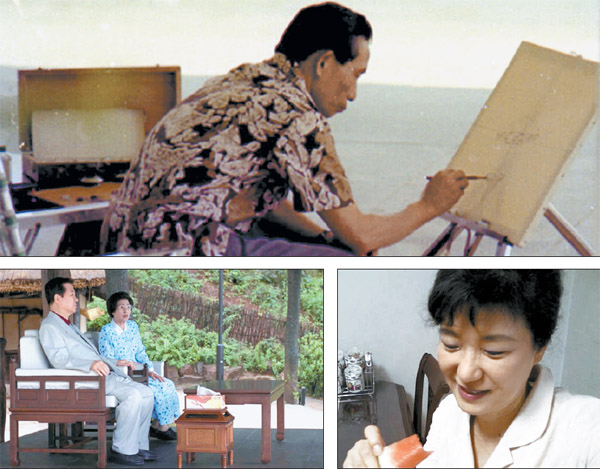 Clockwise from left:President Park Chung Hee painting during a vacation in Jeo Island in South Gyeongsang; Park Geun-hye, then a lawmaker of the Grand National Party, eating a piece of watermelon at her home in Seocho-dong in 2010; and President Kim Dae-jung and first lady Lee Hee-ho resting at the pavilion in Cheongnamdae overlooking the lake. [JoongAng Ilbo]

Park scolded his staff for having gone too far and thought about returning to the Blue House.

But he ended up spending the summer there and the island was formally designated as a presidential retreat. The next year, more construction took place to build a compound of three buildings, known as Cheonghaedae, and a nine-hole golf course on the island of 434,100 square meters.

During his summers in Jeo Island, Park played volleyball with security agents and enjoyed swimming. He also painted during his vacations.

After his wife was assassinated in 1974, Park visited Cheonghaedae. He wrote a poem there in August 1975, one year after his wife’s death, to commemorate her.

As the president’s daughter, Park Geun-hye spent her summers on Jeo Island. Park was photographed there as a middle school student in 1967 wearing a bikini.

Park left the Blue House in 1979 after her father’s assassination and she has not been able to visit the former family retreat since. She has said she wants to return to the island sometime. Cheonghaedae is managed by the Ministry of National Defense and civilian access is restricted.

The presidential vacation complex was completed in June 1983. The compound of 1.8 million square meters (443.8 acres) has 46 buildings and a golf club.

Chun was an enthusiastic soccer player since his days in the military academy and he often played with security agents. During winters, he and his wife skated on the frozen lake.

Chun’s successor Roh Tae-woo was a devoted golf player and he often played golf at Cheongnamdae during vacations.

President Kim Young-sam was not a fan of golf. In fact, he was once photographed falling on his rear after swinging a club. He declared he would never play golf again during his presidency.

Instead, he chose to jog, and a jogging track was built along the Cheongnamdae golf course in 1993. Kim also visited the presidential retreat with his grandchildren. A playground was built in the garden.

Cheongnamdae became particularly famous during his presidency because he made a major decision there. During his summer vacation in August 1993, Kim decided to introduce a dramatic change in the country’s financial system.

In that month, an urgent executive order was issued to prohibit all financial transactions under other people’s names. Since then, the public has paid closer attention to the president’s summer vacations.

President Kim Dae-jung decorated a part of Cheongnamdae to remind him of his hometown, putting in a pavilion with a thatched roof that displayed farming tools.

Photos of his summer vacations also revealed his affection for his wife. He and first lady Lee Hee-ho were frequently seen together during their holidays. Kim toured the coast with Lee aboard a Navy boat, and the couple went fishing together and fed ducks.

Kim spent his vacations with his sons. But in 2002, the final year of his presidency, they were unable to enjoy a family vacation because the prosecution was investigating the sons.

President Roh Moo-hyun differed from his predecessors by spending three out of his five summer vacations at the Blue House.

In 2004, Roh stayed in the Blue House for the summer because the National Assembly had impeached him. The Constitutional Court later overruled his removal from office.

Roh also stayed in the Blue House for the summer of 2006 because of serious floods. In 2007, he canceled his summer vacation because a group of Korean missionaries were abducted in Afghanistan.

In the first year of his presidency in 2003, Roh spent a day at Cheongnamdae and then transferred ownership of the facility to the North Chungcheong to allow the public access.

Without Cheongnamdae, Roh used a military retreat in Daejeon for holidays or stayed at the Blue House.

According to records, Cheongnamdae was used by past presidents 88 times for a total of 471 days. Walking paths were named after six former presidents and statues of them were built there.

The statues depict the former presidents’ activities during their vacations. Chun’s shows him taking a walk, Roh Tae-woo is playing golf and Kim Young-sam is jogging. The statue of Kim Dae-jung is reading and Roh Moo-hyun is riding a bike.

President Lee Myung-bak was known as a workaholic and he often cut his vacations short. During his first summer vacation in 2008, Lee actually worked from his retreat on the second day. At the time, the U.S. Board of Geographic Names designated Dokdo as being of “undesignated sovereignty” on its Web site, and Lee successfully worked to change the label. It now calls Dokdo Korean territory.

Lee often spent his summer vacation at a navy retreat in Jinhae accompanied by his family. He enjoyed playing tennis, fishing and reading books, including e-books.