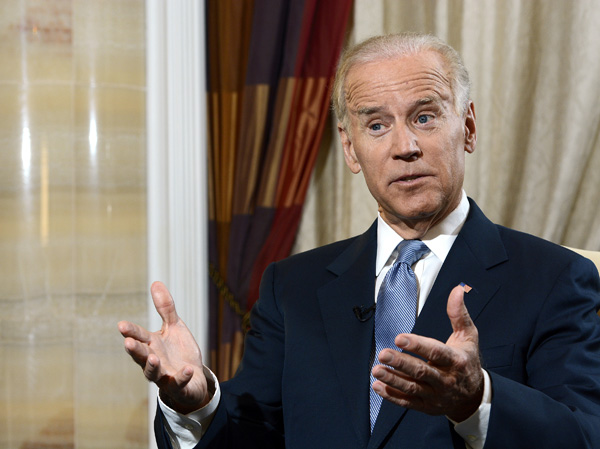 U.S. Vice President Joe Biden says his country’s economic recovery is on track even as China’s growth has slowed.

“It won’t derail it,” Biden said in an interview in Singapore. “But obviously, slowing of growth in the second-biggest economy of the world is just like if our economy slowed: it will affect the world.”

China’s gross domestic product rose 7.5 percent in the second quarter from a year earlier, down from 7.7 percent in the previous period, extending the longest streak of sub-8 percent expansion in at least two decades. Officials on July 25 ordered more than 1,400 companies in 19 industries to cut excess production capacity this year, part of efforts to shift toward slower, more-sustainable growth.

China is the biggest trading partner for the United States after Canada, with two-way trade last year reaching $536.2 billion. Bilateral commerce favors China, with the deficit on the U.S. side at $315 billion in 2012, more than any other country. China is also the biggest foreign owner of U.S. Treasuries, with its holdings rising to a record $1.316 trillion in May, according to Treasury Department data.

“I would agree with that 100 percent,” said Geoffrey Lewis, global market strategist at JPMorgan Asset Management in Hong Kong, referring to Biden’s comments. “We’re not talking a really, really hard landing in China, we’re just talking about growth of maybe 6.5 percent rather than 7.5 percent - that absolutely will not derail U.S. economic recovery.”

Biden spoke about U.S.-China ties as he wrapped up a six-day trip of Singapore and India. He also met with Japanese Prime Minister Shinzo Abe.

The United States, Japan and Singapore are among a dozen countries working toward an agreement on the Trans-Pacific Partnership, a free-trade accord to link an area with about $26 trillion in annual economic output.

“My key takeaway is there is interest and enthusiasm for enhanced trade and commerce,” Biden said. The TPP offers “incredible economic promise.”

Revised data from the U.S. Commerce Department last month showed the world’s largest economy grew at a 1.8 percent annualized rate in the first quarter of the year as consumer spending climbed at a 2.6 percent pace. While both estimates were lower than previously calculated, consumer spending rebounded in May and other reports showed the housing recovery is gaining momentum and consumers are becoming more confident.

“China’s slowdown is unlikely to have a meaningful impact on U.S. growth,” said Song Seng-wun, an economist at CIMB Group Holdings in Singapore. “U.S. growth is determined more by domestic consumption. The U.S. has seen fairly steady growth.”

Biden also sought to ease tensions in the region on his visit, pushing China to negotiate quickly with Southeast Asian nations on a code of conduct for the South China Sea, an area he said is a “major, major, major highway of commerce.” The U.S. is seeking to compete with China economically, while also collaborating in areas such as the environment, Biden said.

“We see a China that’s made up of competition and cooperation,” he said. Bloomberg