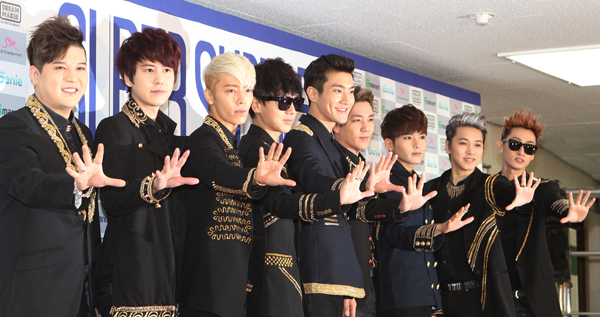 Boy group Super Junior completed its concert “Super Junior World Tour ‘Super Show 5’ in Tokyo” in Japan over the weekend at the Tokyo Dome.
During the two-day concert, which started on Saturday, the group met with about 110,000 fans at its concert.
The members not only performed many of their hit songs including “Sorry, Sorry,” “Mr. Simple” and “Sexy, Free and Single” but also presented “Hero,” “Tuxedo” and “Bambina,” all of which were included in the first Japanese album “Hero” that was released last week.
The album ranked No. 1 on an Oricon daily chart, one of the major music-ranking service providers in Japan.
Due to the popularity the group has garnered in Japan, its agency — SM Entertainment — said that the group will have an additional performance in Osaka for two days starting November 15, according to local media reports.
The team will now travel to Bangkok, Thailand, for a two-day concert starting Saturday.