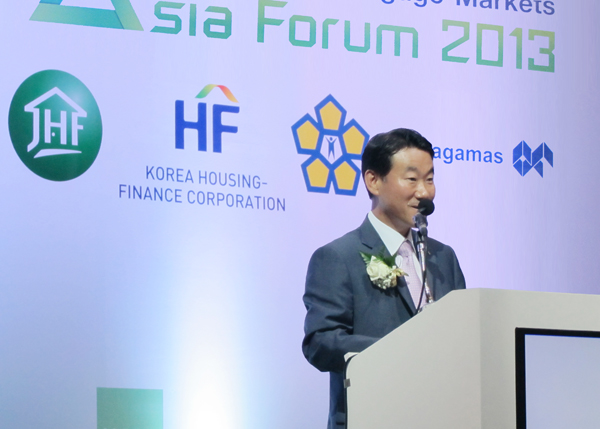 Korea Housing Finance Corporation CEO Seo Jong-dae encouraged CEOs and government officials in Southeast Asia to make new investments in Korean covered bonds, whose sale is expected to receive the green light from the National Assembly near the future.

Covered bonds are backed (or “covered”) by a pool of high-quality assets including mortgage loans and Treasuries issued by public firms.

At the Asia Forum 2013 Secondary Mortgage Markets hosted by Thailand’s Secondary Mortgage Corporation in Bangkok yesterday, Seo shared his views of the Korean mortgage market as the keynote speaker. The name of his speech was “The Development of Korean Mortgage Securitization Market.”

Around 400 government officials and CEOs of financial institutions in Asia, including the Japan Housing Finance Agency, participated in the forum.

“The market has grown to be robust, substantial and resilient,” Seo said, adding that the Korean housing finance market has had consistent growth since the implementation of an economic development plan in 1960 by the Park Chung Hee government.

“The Korean government has set a goal to increase fixed-rate mortgage loans up to 30 percent of total mortgage loans by 2016 in order to control household debt,” he said.

In January, the cabinet approved a bill that allows the sale of covered bonds.

A subcommittee of the National Assembly approved the bill in June, and it is awaiting a final vote in the assembly.

Once the bill is passed, it will go into effect six months later, Seo added.

In addition to the Korea Housing Finance Corporation, banks with a capital ratio of 10 percent or above and equity capital of 100 billion won ($88.9 million) are eligible to issue covered bonds.

Household debt for Asia’s fourth largest economy stood at 964 trillion won in 2012, nearly 300 trillion won up from 665 trillion won tallied in 2007, according to the Financial Services Commission.

Established in March 2004, the Korea Housing Finance Corporation’s key roles include promoting a stable and robust housing market and facilitating a stable supply of long-term, fixed-mortgage loans. The state-run corporation’s key product is long-term fixed-rate installment loans and it has provided a total of 76 trillion won since its birth.