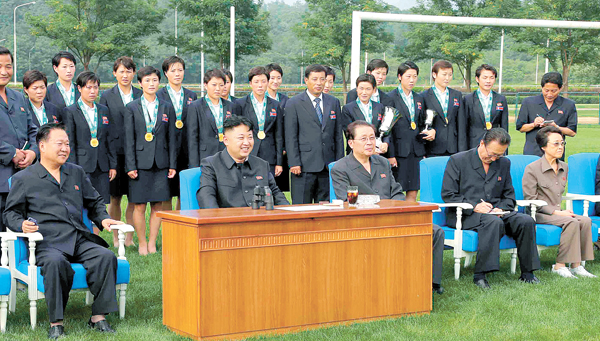 Kim Yang-gon, the director of the United Front Department of North Korea’s ruling party, who is in charge of the Kaesong Industrial Complex, recently accompanied leader Kim Jong-un at several public events but his name was not mentioned in the state media.

Rodong Sinmun, the official newspaper of the ruling party, on Thursday released articles and photos of the victory of the North Korean woman’s football team, which won the East Asian Cup in Seoul, on its first three pages. It covered Kim Jong-un meeting with the athletes.

In the photos, Kim Yang-gon appeared with Vice Marshal Choe Ryong-hae, chief of the General Political Bureau of the North Korean People’s army, Jang Song-thaek, the powerful uncle of Kim Jong-un, and Kim Kyong-ui, Jang’s wife and the aunt of the leader, along with other top officials.

The newspaper mentioned the names of 16 people who accompanied Kim Jong-un to the event, including some deputy ministerial-level officials. But it didn’t mention the name of Kim Yang-gon, who occupies a ministerial-level post.

“It is unusual that the Rodong Sinmun didn’t mention Director Kim, even though it listed Ri Ju-bong, a secretary of the Ministry of Physical Culture and Sports [a position lower than Director Kim’s],” a Unification Ministry official said. “We are analyzing why.”

On the front page, a photo shows a group of high-ranking officials standing. Kim Yang-gon is behind them, his face obscured by Jang Song-thaek.

Given the importance of Kim Yang-gon’s position, analysts said the omission can’t be a mistake.

The most prominent theory is that the omission is a warning that he could lose his job if the deadlocked negotiations over the Kaesong park ultimately fail.

North Korea has demanded the immediate resumption of business at the eight-year-old complex, which it unilaterally suspended in April. The regime recently threatened to deploy troops to the strategically-located city of Kaesong if the industrial complex is permanently shut down.

“North Korea tends to punish military officials by demoting them,” Kim Yeon-su, a professor at Korea National Defense University, said. “But when it comes to Kim Yang-gon, a party secretary, the punishment seems to be omitting his name from a state media report.”

Although Kim Yang-gon didn’t attend any of the six rounds of the relatively low-level talks, he is known to be a top decision-maker for Kaesong issues. In April, he visited the complex and issued a statement to announce the withdrawal of the 53,000 North Korean workers from the park.

Although his name was omitted from the state media report, he appears to have maintained his prominent position.

In a photo, he is seen standing right behind the Jang Song-thaek and Kim Kyong-ui, the powerful guardians of Kim Jong-un.

“Inter-Korean affairs are still being discussed and decided by three people: Kim Jong-un, Jang Song-thaek and Kim Yang-gon,” said Ahn Chan-il, the chief of a research institute on North Korean affairs. “How inter-Korean affairs go in the near future will decide his ultimate fate.”