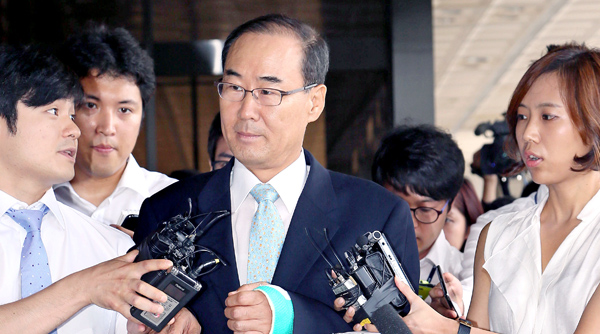 Jun Gun-pyo, former commissioner of the National Tax Service, was indicted for taking bribes from CJ Group in return for turning a blind eye to the conglomerate’s tax evasion. By Kim Kyung-bin

“Fire!” a passerby shouts. “Where?” asks a firefighter. The passerby answers, “At the tax office.” The rescuer then says, “Well, then let it burn.” The joke exchanged among officials of Japan’s National Tax Agency is introduced in a book titled “Tax Levy Power” published in Japan 2006. Tax authorities’ stigma may be the same everywhere in the world.

The book subtitled “Research on the National Tax Agency” describes stories behind tax audits, the strain and coziness between politicians and tax officials, and the power of tax authority intelligence. If we were to have a similar book published, the first chapter would be on the shady deal and relationship between CJ Group and senior tax executives. The hundreds of thousands of dollars worth of cash and luxury goods a former tax commissioner received as “gifts” from the CJ chairman as congratulations for his promotion to the top seat in the tax office could be the opener. The incident can stir the imagination on how much senior officials before him collected as tokens of appreciation and congratulations from executives.

The tax chief indicted on bribery charges in connection with CJ Group’s tax evasion case was someone known for his generosity and particularity. The meaning of the description was unclear then, but it is now evident in news reports and prosecution findings. What kind of generosity can a tax commissioner offer to corporate heads? Now that he is arrested, many who had been so-called corporate executive friends who benefited from the “goodwill” are stepping up to spill the beans on the former commissioner.

The reputation of Korea’s National Tax Service had not always been this bad. In a joint survey by the JoongAng Ilbo and East Asia Research Institute, the National Tax Service ranked third after the Constitutional Court and Supreme Court in public approval ratings of state institutions. Computerization of tax materials is higher than in most other countries and local tax officials generally have been rated highly for professionalism, work ethics and transparency.

But a corruption streak by senior officials has spoiled the name and image of the top tax agency. Former President Lee Myung-bak said the National Agricultural Cooperative Federation and National Tax Service beat other state and public organizations in the number of heads sent off to the prison.

But the tax agency’s reputation and credibility have nose-dived.

Talks and promises of reform were repeated every time the agency was hit with a new scandal. One measure would be restricting the power that could breed corruption and collaboration with corporate tax subjects. The symbol of that power is the tax audit. According to the law, tax authorities can merely ask and investigate in audits. Audit guidelines to tax audits are specified by the agency’s internal procedures. Since there’s no outside restraint or supervisory mechanism, it is no wonder tax officials can randomly carry out audits and wield so much power.

Article 81 of the National Tax Basic Law that aims to contain tax audit abuses by limiting them to the “minimum scope to ensure tax fairness” has long been forgotten. Tax audits now serve a variety of purposes - to crack down on real estate speculation, inflation, bar and nightlife businesses or tame large companies and increase tax revenue.

Many have suggested some kind of control mechanism, but none has been established.

The tax office also is of a colossal scale. The National Tax Service runs a headquarters in Seoul, 11 outlets nationwide and six district offices. Along with streamlining the organization, there have been proposals to limit the term of the commissioner, realign manpower and restrict employment of retired officials. The ideas are abundant, but have yet to be realized.

The tax office won’t easily succumb to reform. There are few who wouldn’t be scared of getting a call from the tax office, including politicians, professors and media organizations. Few want to make an enemy of the tax office and none wants to pursue its reform. Even the liberal and opposition camp is silent about reforming the agency. Is it because they don’t know how to revamp it, or do they have something to hide?

Small businesses and individual taxpayers who can’t afford to hand congratulatory gifts and make connections with tax officials can only swallow their resentment in the face of the tax agency’s slogan on “Fair Tax Governance.”