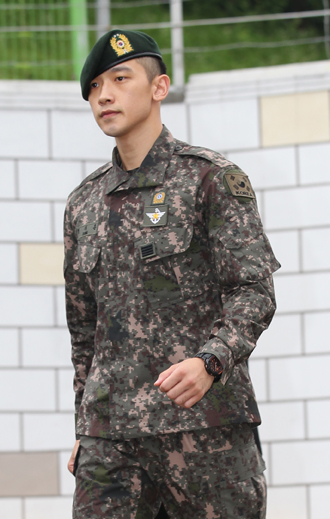 Even though the Ministry of National Defense has announced plans to dissolve the Defense Media Agency’s public relations support unit - where enlisted celebrities served as so-called “entertainment soldiers” - debate is still swirling about the controversial program. Some are even calling for celebrities who have already served as entertainment soldiers to be required to re-enlist and perform their military service again.

The latest debate is over 10 former entertainment soldiers who reportedly did not properly complete the paperwork to join the special unit. But one name mentioned is much bigger than the others - Rain, the singer and actor whose real name is Jung Ji-hoon.

Rain was discharged from the military last month, but before he left his name was mentioned in a controversial TV documentary about inappropriate behavior among entertainment soldiers.

Two other entertainers, Seven and Sangchu, were caught drinking and going to an illegal adult massage parlor in Chuncheon, Gangwon. Although Rain was not with those celebrities, he did perform at the same event earlier in the day.

Now, however, Rain is being pulled into this new controversy over his application to the public relations support unit.

To be selected for the entertainment unit, celebrities had to present their career histories, detailing the TV programs and movies they starred in and music they released. In addition, the celebrities were asked to submit a letter of recommendation by any relevant association.

Kim Kwang-jin, opposition Democratic Party lawmaker, says that Rain benefited from his fame and was chosen as an entertainment soldier even though he did not complete the full application.

The lawmaker also added on Tuesday that requiring soldiers who had problems with their enlistment to serve again was “righteous.” He cited the case of the singer Psy, who, long before his “Gangnam Style” days, had to serve in the military a second time as a full-time solider because he spent too much time working on his career and performing during his first stint.

However, the Ministry of National Defense says it not considering requiring Rain to serve again.

“Rain is a top singer known by almost everyone in Korea,” said Kim Min-seok, spokesperson for the Ministry of National Defense, adding that his performances and contributions to the music industry are widely known and did not require additional proof. “That’s why some of the documents were not collected prior to his enlistment, but that is not enough to make him serve his military duty again.”

Rain was enlisted in October in 2011 and started as an assistant drill instructor. But he moved to serve with the Defense Media Agency from March 2012 until he was discharged last month.