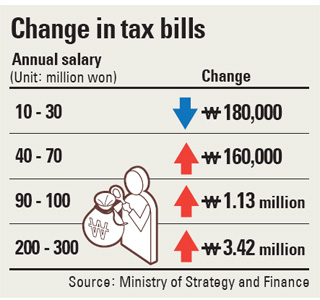 The government has stuck to its principle of not raising tax rates, but it turns out people in high- and middle-income brackets will be paying more income taxes from next year after tax credits are slashed.

The Ministry of Strategy and Finance yesterday announced its tax reform plan for 2014, which has fewer tax credit benefits than this year.

As a result, the government will collect an additional 1.3 trillion won in tax revenues.

“The point of the latest tax reform plan is to secure solid sources of tax revenue and promote equality in taxation,” said Hyun Oh-seok, finance minister and deputy prime minister for the economy, at a press conference. “The current income tax credit system has favored top earners, so this is being changed in a way to enhance redistribution of income in a bid to add to tax revenue.”

The minister added that the country’s total individual tax rate, including all taxes an individual pays, will reach 21 percent by 2017, up from 20.2 percent last year.

But under the revision, low income families will pay less as some tax credits for them are expanded.

For the next five years, the government aims to rake in 2.49 trillion won in tax revenues.

Top earners and conglomerates will pay an additional 2.97 trillion won in tax, while the working class and small businesses will pay 620 billion won less than before.

People whose annual incomes are between 30 million won and 40 million won will receive a 5 percent credit, down from the current 10 percent.

Since taxes on the so-called middle class are going to rise, controversy is expected to follow.

“Some people who will get fewer tax benefits might not support the latest reform plan, but I hope there will be an understanding of the government’s efforts to secure a growth engine for the country and increase tax revenue to be used to enforce key policies,” Hyun said.

For businesses, the ministry is not going to adjust corporate tax rates. Instead, tax deduction rates for R&D activities of conglomerates will be cut from the current 7 to 10 percent to 3 percent.

Meanwhile, people who earn less than 34.5 million won will still enjoy greater tax credits. The earned income tax credit (EITC) is going to be expanded and a child tax credit (CTC) will be created. The EITC will reduce up to 2.1 million won from income tax liabilities for households with annual incomes of 25 million won or less. The CTC will provide up to 500,000 won per child for those households if they have children under 18 in a bid to boost the country’s low birth rate.

The ministry is also pushing a new system that cuts how much a person should pay as income tax instead of using tax credits, which have favored top earners.

The ministry decided to change the system in a way that makes it more fair for low-income earners. For all households, flat-rate deductions will be made after they paid their income taxes. Fifteen percent will be deducted for medical and education spending and donations. For insurance payments, it will be 12 percent.

The current income tax law applies tax rates of 6 percent to 38 percent on annual incomes of individual earners. This will be maintained.

To further increase revenue, the government will start taxing the clergy and farmers who pull in more than 1 billion won a year. No government has taxed the clergy for the last 40 years.

“We have reached an agreement with religious groups, despite some initial discontent,” said Kim Nak-heo, executive director of the tax office at the finance ministry. “The agreement is quite an achievement.” The plan will be sent to the National Assembly next month.