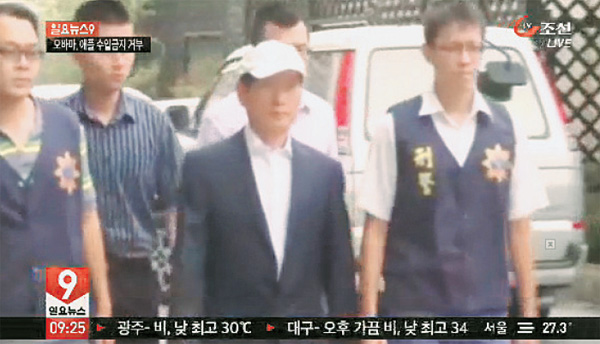 The prosecution has raised suspicions regarding the arrest of a key figure in the SK corruption scandal, suggesting executives with the chaebol colluded with him to skew the case towards the defense. Jailed SK Group Chairman Chey Tae-won says the man, Kim Won-hong, is behind the embezzlement that he’s currently doing time for.

The Seoul Central District Prosecutors’ Office earlier this week submitted to the Seoul High Court that it has grounds for “suspicion” regarding the arrest of Kim, a former adviser to SK Shipping, in Taiwan on July 31.

SK Group officials, including Chey Jae-won, the senior vice chairman and younger brother to the boss, were also in Taiwan on the day of the arrest, according to prosecution sources.

SK Group representatives confirmed that Vice Chairman Chey and other executives visited Taiwan at the time but said it was to convince Kim to return to Korea to take the stand as a witness. They said that fact had already been revealed to the court.

Kim, 52, has been pointed to by Chairman Chey’s defense team as a main figure behind the embezzlement that the chairman has been found guilty of.

Kim fled to China to avoid the investigation into corruption in the chaebol in March 2011. He was wanted by Interpol before being arrested by Taiwanese officials last week for breaching immigration law.

Chey, head of the country’s third-largest conglomerate, was found guilty of embezzling company money to the tune of 49.7 billion won ($44.2 million) and was sentenced to four years on Jan. 31. His younger brother was acquitted of embezzlement and breach of trust charges.

The Chey brothers claim they were unaware of the scheme and that they were duped by Kim Won-hong.

Chairman Chey testified that he provided some 600 billion won through Benex for Kim Won-hong to manage for personal investments between 2005 and 2008.

This includes the 49.7 billion won he is charged with embezzling, but none of the money was ever returned to Chey.

Chey claimed he had trusted Kim, who had served as asset manager for the family dating back to 1998.

On Wednesday, the Seoul High Court, which was scheduled to deliver a verdict today, postponed the decision to Sept. 13.

Court officials said they need extra time to “review hundreds of records related to the case to reach a verdict.”

But the court denied the defense team’s request on Monday to reopen hearings to enable Kim to testify once he is extradited from Taiwan. The Korean Ministry of Justice said it is working with Taiwanese officials to extradite Kim.

In the appeal, prosecutors are calling for another two years to be added to Chey’s prison term and for his younger brother to be sentenced to four years for his part in the embezzlement. 