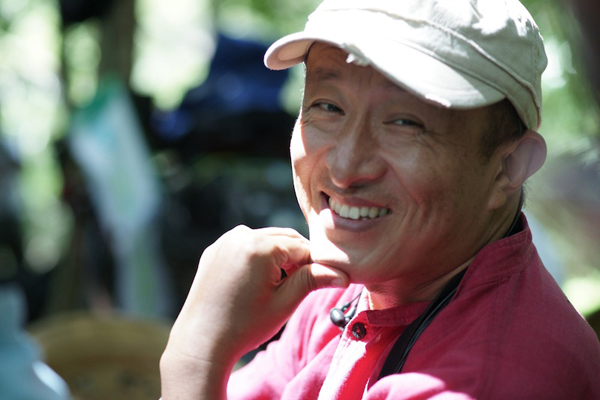 A notable article about the faith of Tibetan Buddhism is its belief in the reincarnation of prominent religious leaders. Designated incarnations are bestowed the name “Rinpoche.”

Dzongsar Khyentse Rinpoche, who is also known as Khyentse Norbu, is the third incarnation of Jamyang Khyentse Wangpo (1820-1892), a leading figure of Tibetan Buddhism in the 19th century. He was born in 1961 and was recognized as an incarnation of the famous Buddhist at age 7.

But in addition to being Rinpoche, the spiritual leader has an unlikely attachment to his name: filmmaker.

While studying in England in the 1990s, Khyentse Norbu became a consultant for Bernardo’s Bertolucci’s “Little Buddha.” Then, after going to film school, he wrote and directed two films - “The Cup” in 1999 and “Travellers and Magicians” in 2003. And his latest movie “Vara: A Blessing” is set to be released soon.

But Khyentse Norbu never neglects his duty as a Bhutanese lama. He runs four temples in Tibet and India, where 2,000 trainees practice. The Rinpoche has founded a number of retreats, called Siddhartha’s Intent, across the world.

Recently, Dzongsar Khyentse Rinpoche was invited to Korea by Shechen Korea, a Korean society for the study of Tibetan Buddhism, and held a press conference on Aug. 5.

A. No, I’m not. My films are not mainly aimed at spreading Buddhism. My first work, “The Cup,” is about a monk who does everything he can to watch the World Cup in a temple. My second film, “Travellers and Magicians,” depicts social changes in Bhutan. And my newest film is a romance. It would be great if the movie is screened at the Busan International Film Festival. Because I am human, I am also interested in love. When you fail in love, you can produce an excellent romance movie. I also failed many times (laughs).

This is your third time visiting Korea.

I was too busy to taste the real Korea. But I watched a lot of Korean movies. Especially, “Oldboy” was quite impressive. I also watched “Gangnam Style” on YouTube.

I think it appeals to intellectuals because it has its roots in rationality. It is a rare religion that preaches to question and analyze its doctrines.

Tibetan monks have set themselves on fire to protest against the Chinese government.

I don’t know much about political situations. But from the Buddhist point of view, self-immolation is not desirable for any reason. Buddhism and Buddhists should be set apart. Buddhists are only humans, with emotions. The monks’ self-immolations must have had something to do with their emotions.

Bhutan is often ranked as the happiest country in the world.

I think that is attributed to its slow development. I am proud of that ranking, but I am not sure if it is the result of our own efforts or just a coincidence.

What should we do to find happiness in our everyday lives?

There is no magic solution. I am always contemplating it, though. I think it depends on how you define happiness. Most importantly, we should teach children a definition of happiness that doesn’t come from things. They should be taught that winning a Ferrari doesn’t necessarily bring them happiness.