50 years on, Paik still ahead of his time

50 years on, Paik still ahead of his time 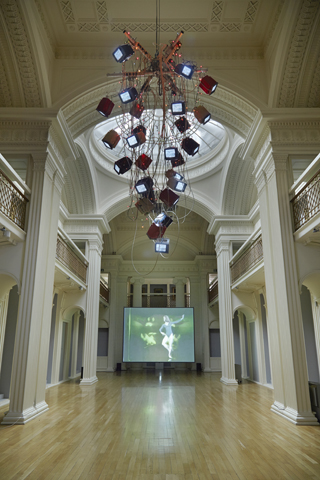 Nam June Paik’s “Video Chandelier No.1”(1989) is hanging from the ceiling of the Talbot Rice Gallery in the University of Edinburgh, Scotland. Below the work is shown a 28-and-a-half-minute video work “Global Groove”(1973). They are part of the “Transmitted Live: Nam June Paik Resounds,” which opened on Friday, as part of the Edinburgh International Festival. Provided by Nam June Paik Art Center

EDINBURGH - Now, from the ceiling of Talbot Rice Gallery in the University of Edinburgh in Scotland are hanging tens of cathode-ray tube TV monitors just like a giant bunch of electronic grapes. On the walls around the installation are screens showing geometrical figures and human figures’ grotesque movements.

All these visual impacts come with music that will remind people of techno dance clubs. But this is not a futuristic dance club. This is an exhibition of the late artist Nam June Paik (1932-2006), the Korean-born pioneer of video art. About 150 pieces of Paik’s works are on display.

The exhibition, “Transmitted Live: Nam June Paik Resounds,” which opened on Friday, is part of the Edinburgh International Festival. The exhibition will continue until Oct. 19 even after the festival featuring various concerts and performances including dance and theater wraps up on Sept. 1.

“The theme of this year’s edition is interaction of art and technology,” said Jonathan Mills, director of the festival. “Is there any artist who is more suitable for the theme than Nam June Paik? He is a philosopher and thinker beyond a video artist. Fifty years ago, he prophesied changes that would shape the contemporary world.”

“The exhibition celebrates the 50th anniversary of Paik’s first solo exhibition,” Pat Fisher, principal curator of Talbot Rice Gallery, said. “It is meaningful that the exhibition is held here at University of Edinburgh, because the university was attended by James Clerk Maxwell, who developed electromagnetism theory. In addition, Scotland is the country that produced John Logie Baird, who invented the television.” 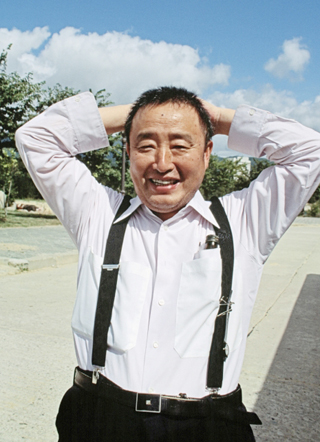 Paik’s first solo exhibition, “Exposition of Music - Electronic Television” was held in Germany’s Wuppertal in 1963. He lived in the country in the late 1950s and early 1960s. In the exhibition, the artist brought television into the realm of art for the first time.

Since the exhibition, Paik’s focus in art moved from music to video art. In the show, he presented 13 TV monitors with various images generated through the transformation of circuits in them.

“Paik presented the cold TV monitors as a tactile and multisensory medium,” said Lee Chae-young, curator of Nam June Paik Art Center in Gyeonggi province, Korea. She and Fisher are cocurators of the exhibition, which are based on the collection of the Korean museum.

On the first floor of the gallery is “TV Cello”(1999), which Paik made with TV monitors for the late cellist and his muse, Charlotte Moorman (1933-1991). The seven TV monitors in this work display the performances that Paik and Moorman made together.

“Schubert”(2001) and “Beethoven” (2001), two of Paik’s handmade robots with his humorous interpretation of the two great music composers, are also on display on the first floor.

In the Round Room of the gallery sits Paik’s “TV Buddha,” an old Buddha statue gazing at his own technologically generated image on a TV monitor. Some critics say the work shows contemporary people’s narcissistic seek of their own images from TV.

To celebrate the exhibition, Takehisa Kosugi, a Japanese composer and performer, and Lee Ok-kyung, a Korean contemporary cello player, had performances at Talbot Rice Gallery on Thursday and Friday, respectively. And Korean electronic sound performer Kwon Byung-jun and British artist Haroon Mirza had performances on Saturday.

Beside Paik, a group of Korean media artists are participating in the Edinburgh International Festival.

Among them, Kim Hyung-su, who has created media facades using LEDs, is showing LED installation works titled “Media Skins” near Usher Hall, the main venue of the festival and other venues.

And a team of artists, named Your Media Arts Project or YMAP, presents a fusion of dance and media art “Madame Freedom,” based on the old Korean movie and novel of the same title.