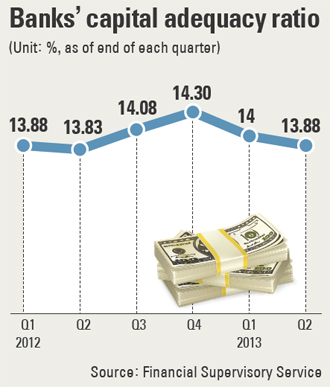 As the sluggish economy affects companies’ credit ratings and loans increase, the financial soundness of banks shows a decrease in the second quarter.

According to the Financial Supervisory Service, the Banks for International Settlements (BIS) ratio of banks in the second quarter was 13.88 percent. This is 0.12 percentage points lower than in the first three months of the year.

Although it is higher than at the end of 2008 when the ratio was 12.31 percent, the fall in BIS ratio is a cause for concern.

“The BIS ratio dipped mostly because risky assets grew much faster than the bank’s capital increase,” the nation’s financial authority said in its report.

Citibank Korea had the highest BIS ratio at 17.39 percent, indicating it was the most sound.

Export-Import Bank, or Exim Bank, had the lowest BIS ratio at 10.33 percent.

Local banks recently have been battling a 50 percent to 60 percent plunge in profits, which has driven them to take preemptive actions such as shutting down roughly 90 unprofitable branches and freezing or cutting the wages of both executives and employees.

The financial authority said in a statement it will help banks improve soundness by thorough risk management and equity capital increases.