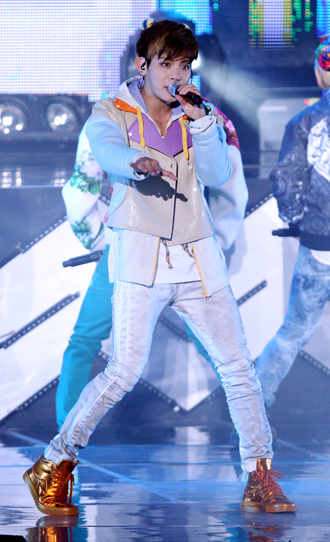 Jonghyun of the boy group SHINee

Jonghyun of the boy group SHINee denied rumors he is dating Kyungri, a member of the girl group 9 Muses, on a social media account on Sunday.

“There are a lot of stories about me on Web sites,” said Jonghyun. “To tell you the truth, I went to the movies with friends, but they are just my friends not celebrities.”

He added that he hopes no one gets hurt by his message or the rumors.

Gossip started swirling on Saturday when Jonghyun and his friends were spotted at a local movie theater, including one women who was thought to be Kyungri. Fans quickly demanded to know what was going on.

“I’m just happy that there are so many people who care about me,” said Jonghyun.

“For the many people who are now relieved to know that I’m not dating, I’m sorry. Even though this isn’t something that I should feel sorry about, I’m sorry.”