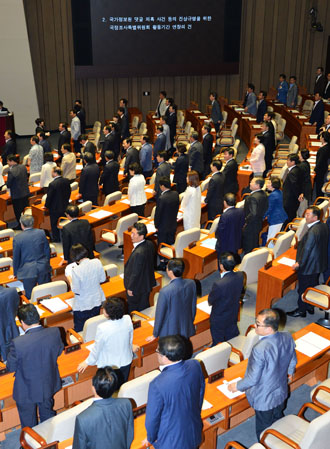 Lawmakers vote by rising yesterday in the National Assembly to approve the extension of a special investigation into allegations the National Intelligence Service ran a smear campaign in the presidential election last year. [NEWSIS]

With little progress for over a month, ruling and opposition lawmakers have agreed to extend a special National Assembly investigation into allegations that the country’s spy agency interfered in last year’s presidential election.

At a plenary session yesterday, 212 out of 234 lawmakers voted in favor of pushing the Aug. 15 deadline back to Aug. 23.

The probe, conducted by 18 selected lawmakers from the ruling Saenuri Party and the largest opposition parties, has been mired in conflicts between the two main parties over who should be called to give testimony at tomorrow’s hearings.

Both sides have managed to agree on two witnesses - former National Intelligence Service chief Won Sei-hoon, who allegedly directed the smear campaign against Democratic Party candidate Moon Jae-in in 2012, and former Seoul police chief Kim Yong-pan, who is accused of trying to cover up the case.

But an unfortunate scheduling conflict seems likely to keep both of them away.

Won is already in jail for his suspected involvement in the presidential election interference, as well as bribery.

His hearing for the two cases are slated for tomorrow, the same day as the National Assembly probe hearing.

Kim Tae-heum, a spokesman for the Saenuri Party, told reporters yesterday that former police chief Kim has sent a letter to the ruling party saying he would attend a hearing on Aug. 21, but not the one tomorrow.

That’s because the former police chief has to be in court with Won on Wednesday for his suspected involvement in the NIS scandal.

Won has not yet formally expressed his intention to attend the hearing.

“If Won doesn’t appear at the hearing, we are considering visiting him in jail and questioning him there,” Kim said.

Still, under the law, lawmakers can’t force them to attend a legislative hearing without a warrant.

Concerns are growing in the legislature that Won and Kim’s absence will lead to further political clashes.

Additionally, Saenuri lawmakers have not agreed to call two additional witnesses - Representative Kim Moo-sung and Korean Ambassador to China Kwon Young-se - for another hearing into the NIS case.

Representative Kim Sun-dong from the opposition Unified Progressive Party argued yesterday that extending the deadline would be meaningless if Kim and Kwon don’t appear.