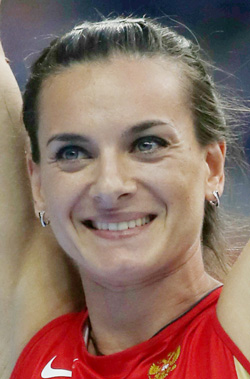 MOSCOW - Yelena Isinbayeva, the greatest women’s pole vaulter of all time, is gearing up for a lift from her home crowd in what will probably be the Russian’s last major championship final on Tuesday.

Isinbayeva, who holds the outdoor world record of 5.06 meters (16 feet, 7.25 inches) and was virtually unbeatable in the discipline between 2003 and 2008, has not won a global title since her Olympic gold five years ago in Beijing.

The 31-year-old had said she will end her illustrious career after the competition at the Luzhniki Stadium, although she backed away from that statement after qualifying by saying her mind was not yet made up.

While Isinbayeva contemplates retirement, the precocious Kirani James, 20, is set to continue his global domination of the men’s 400 meters by adding a second world gold.

The Olympic champion has American LaShawn Merritt - the only man to beat the Grenadian this season - to contend with.

Americans Duane Solomon and Nick Symmonds, along with Saudi Arabia’s Abdulaziz Ladan Mohammed should provide the main threat to the African.

The women’s 3,000-meter steeplechase final has also been robbed of a marquee name after Olympic and world champion Yuliya Zaripova of Russia had to withdraw after suffering a season-ending leg injury.

Ethiopian duo Sofia Assefa and Hiwot Ayalew, Kenya’s African record-holder Milcah Chemos Cheywa - the last woman to beat Zaripova - and compatriot Lydiah Chepkurui should fight it out for the medals.

Briton Mo Farah, having secured 10,000 meters gold on Saturday, starts his bid to repeat his Olympic distance double when he lines up in the morning’s 5,000-meter heats.

In the men’s discus final, Germany’s Robert Harting starts as the hot favorite to secure a third successive world title, although the Olympic and European champion could be tested by Pole Piotr Malachowski.