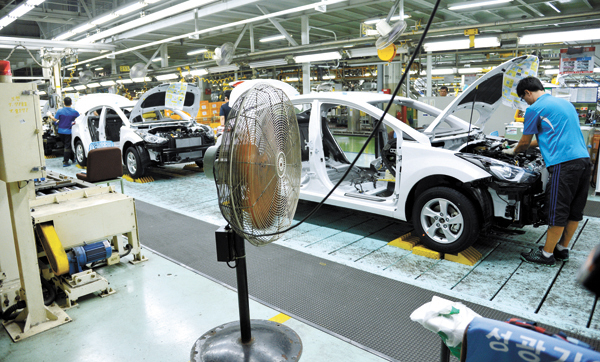 A record 80.4 percent of Hyundai Motor workers and 70.7 percent at Kia Motors approved a strike against the nation’s two largest automakers at a voting session yesterday.

The two unions announced they will walk off the job on Tuesday.

Although management and union representatives could return to the negotiating table during the arbitration period that ends Monday, industry insiders say that seems unlikely.

When the National Labor Relations Committee declares the arbitration period over, the union can strike.

The looming strike is one more headache for Hyundai Motor Group, which yesterday announced the recall of 239,000 Sonatas and Azeras (Grandeur in Korea) in the United States because of possible corrosion of rear suspensions due to road salt.

The company also has been facing demands from irregular workers for permanent positions. Some irregular workers held a walkout in Ulsan yesterday, but the automaker said there was not a significant effect on production.

Hyundai has claimed the union’s demands are excessive. The union made about 180 proposals, including a 130,498 won ($116) raise in monthly base pay and an 800 percent increase in bonuses. 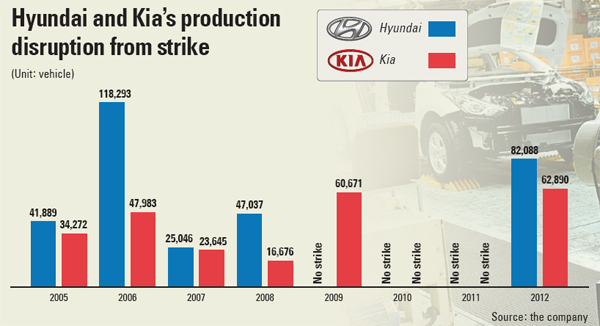 It also wants 30 percent of Hyundai’s net profit to be allocated to workers and a 10 million won payment to employees whose children don’t go to college, to balance the scholarships the company gives to workers’ offspring who do.

Some experts say Hyundai might have to pay an additional 100 million won per employee every year if it agreed to all the union’s demands.

“The union is demanding so much and some of its proposals make no sense,” a Hyundai spokesman said. “We have sent an official request to the union to resume negotiations and are currently waiting for a response.”

The Kia union’s demands are similar. They include a 130,498 won in crease in monthly base pay and a one-time payment equivalent to 30 percent of the company’s net profit. The Kia management and union are dealing only with wage issues in this year’s bargaining.

Hyundai Motor Group officials said they are worried about potential damages from a job action at a time when the company faces intense competition from foreign brands. In addition, other local automakers - GM Korea, Ssangyong Motor and Renault Samsung Motors - have all reached agreements with their unions and are boosting production.

Hyundai and Kia suffered reduced production from March to May when the union refused to work weekends in a disagreement with management over compensation. For Hyundai alone, the company said about 83,000 vehicles weren’t produced on schedule at a cost of 1.7 trillion won in damages.

Although it isn’t sure whether the union will launch a partial or full strike, the automotive group estimated that an eight-hour-per-day strike over five days in Hyundai and Kia factories would reduce production by 30,000 vehicles.

“At this moment, we can’t tell exactly what the damage would be, but we are worried that such a strike could also affect our suppliers and consumers, who might have to wait longer to receive their newly purchased vehicles,” said the Hyundai spokesman.’

Last year, Hyundai said it couldn’t produce 82,088 vehicles due to a strike and lost 1.7 trillion won, while Kia failed to manufacture 62,890 units and saw a 1.3 trillion won loss.

Hyundai Vice Chairman Yoon Yeo-chul, who is in charge of the company’s labor issues and has pulled off the company’s strike-free years in the past, said recently the company will have to increase overseas production if the union keeps refusing to work.

Industry insiders speculate the standoff between management and the unions might not last long. Union members typically receive bonuses before the Chuseok holidays, which are next month, and union leadership elections are approaching.

“2001 was the only year that union executives didn’t seal the wage deal and carried negotiations over to the next union leaders,” said Kim Joon-sung, a researcher at Meritz Securities, in a report yesterday. “The strike could end before the election, which is scheduled for mid-September.”