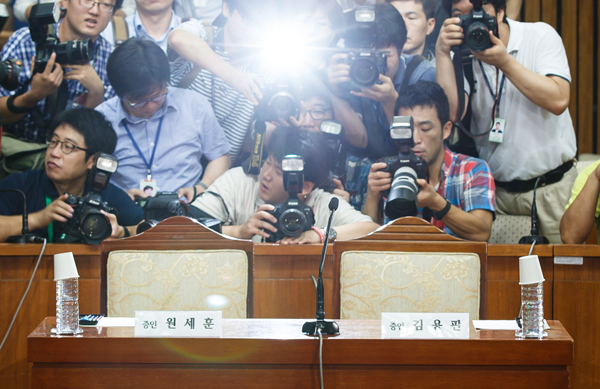 Photographers photograph vacant seats for witnesses at the National Assembly hearing into alleged interference by the NIS in last year’s election. [NEWS1]

The first hearing in the National Assembly’s probe of whether the National Intelligence Service interfered in last year’s presidential election was scrapped yesterday after two key witnesses failed to show up.

Former NIS chief Won Sei-hoon and former Seoul police chief Kim Yong-pan were asked to give testimony by the Assembly’s special investigation committee, which is composed of lawmakers from the ruling and opposition parties, and they were the first of 29 witnesses to be called.

But on Monday, both sent notices to the committee that they would be unable to come for different reasons.

Won, who allegedly orchestrated the online smear campaign against Democratic Party candidate Moon Jae-in, said it would be a violation of the law if he answered some of the questions that lawmakers notified him about in advance.

“After looking at the questions, which were written in the attendance request, I concluded that all of the questions are related to some pending criminal cases or are impossible to answer under the National Security Law.”

Won also said he was “in bad health.” He is currently under detention by prosecutors on charges of allegedly taking bribes.

Former Seoul police chief Kim wrote that he had to attend a court hearing scheduled yesterday on charges of covering up the alleged NIS campaign interference.

Democratic Party lawmakers, who predicted the two men wouldn’t show up, demanded the ruling Saenuri Party agree to a warrant to force them to testify.

Under the law, if a witness refuses to attend a hearing by a special legislative committee, the lawmakers can forcibly call in the witness by issuing a legal warrant. If the witness still continues to refuse, the legislature can file an accusation of a violation of the National Assembly law.

When the floor leaders of the ruling and opposition parties reached agreement on Aug. 7 to resume their probe, they also agreed on legal measures to compel the 29 witnesses to testify.

“The agreement [on Aug 7] says if a witness refuses to attend a hearing, we can request a warrant,” DP Representative Jung Chang-rae said.

“If we get the warrant, we can force them to show up any time today or tomorrow by holding an additional hearing.”

Lawmakers are supposed to hold a second hearing Aug. 19 to hear from the remaining 27 witnesses. On Aug. 21, they will hold a final hearing for witnesses who didn’t show up at the first two.

Following the DP’s demand, the legislature passed a motion to issue a warrant to force them to appear. The lawmakers scheduled a hearing on Aug. 16 at 10 a.m. for the two witnesses.