Park lays down law for Abe

Park lays down law for Abe 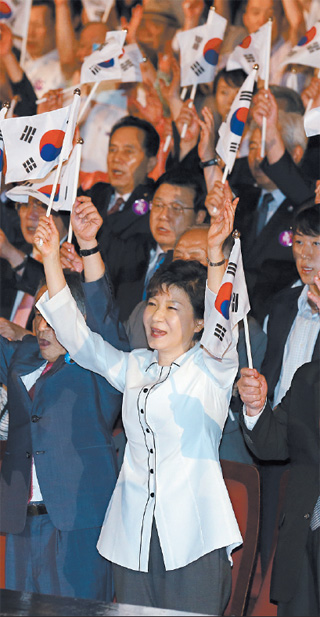 President Park Geun-hye told Japan’s leaders they should show the courage to face the misdeeds of their past and put an immediate halt to their territorial challenges and denial of history in the present.

On the 68th anniversary of Korea’s liberation from Japanese colonial rule yesterday, Park gave a speech titled, “The Great Journey of the Republic of Korea” at a government ceremony in the morning.

Park spent a considerable time addressing the Japanese leadership. While she avoided aggressive or emotional words, Park made clear she won’t stand for provocative behavior from Japan during her presidency.

In the speech, Park again vowed to employ her Northeast Asia Peace Initiative in Korea’s diplomacy with Japan.

While calling Japan an “important neighbor and key partner” for Korea, Park said Japan’s continuing historical distortions cast a shadow on relations between the two countries.

“In the absence of the courage to face the past and a determination to recognize another’s pain, it will be difficult to build the trust necessary for our future,” she said.

“Yi Am, a great scholar of the later Goryeo Kingdom, said the nation is the body of a people and history is their soul,” Park said. “What nation or people would consent to an affliction of their soul, or the taking off any part of their body? Japan must confront this issue.

“I look forward to seeing responsible and earnest action that will seek in particular to heal the pain of those who, even now, carry with them the scars of history,” Park said.

It was clear Park was condemning Japan’s continuing attempts to glorify its military past and to claim Dokdo. Park also pressured the Japanese government to apologize and give compensation to victims of its past aggressions, particularly women forced to be sex slaves for Japanese soldiers and Koreans forced to be conscripted laborers.

Reminding Japan’s leaders that the great majority of their people, particularly the young, desire a better relationship with Korea, Park urged them to fulfill that desire.

“If politics cannot follow the heart of its people and instead returns to the past, a brighter future will never come,” she said. “In accordance with the wishes of both the Korean and the Japanese people and in order that we may become true partners, it is time for the political leaders of Japan to show us a leadership of courage that seeks healing for the wounds of the past.”

“The present situation is a paradoxical one, in which the level of economic interdependence in the region is growing even as the tensions surrounding historical and territorial issues continue to rise,” Park said. “The Northeast Asia Peace Initiative that I introduced seeks to overcome this challenge by providing a framework for multilateral dialogue that begins to implement cooperation and dialogue in the areas where this is currently possible and later expands the scope of cooperation to different areas such as security.

“I hope to see active participation in such efforts by the countries of Northeast Asia so that we may succeed in establishing a new regional order unlike any attempted in the past and open the way to our shared future,” Park said.

Park’s Liberation Day message to Japan’s leaders was stronger than her speech on Independence Movement Day on March 1. In that speech, Park urged Tokyo to “behave in a responsible manner” and hold a “correct” understanding of history in order to advance bilateral relations.

In other parts of yesterday’s speech, Park said her first six months were spent designing and building a new framework for running the country and her government is now ready to implement the plans.

“It will create a rich society where every single person can enjoy a decent life and cultural opportunities without anxieties,” she said, “and make a better nation blessed with jobs and economic vitality.”

Park also promised to ensure that “constitutional values and law and order are respected in our society” and create “a level playing field for every economic player and ensure that individual abilities come before academic achievements.”

The Saenuri Party yesterday welcomed Park’s messages. “Conscientious and pragmatic people in Japan must raise their voices to correct the wrongful historical perception of their leaders,” said Representative Min Hyun-joo, spokesman of the ruling party. “It is the only way for Korea and Japan to improve their ties and cooperate further to make Northeast Asia the center of the world.”

The main opposition Democratic Party, however, said Park failed to address an important topic in her speech.

“Since its foundation, the history of Korea was to build two big mountains - industrialization and democratization,” said Representative Bae Jae-jeung. “While Park detailed the achievements of industrialization, she made no mention about democracy.”

Bae also said it was disappointing that Park didn’t address some pending social and political issues such as tax reform, economic hardships and the National Intelligence Service’s alleged politicking. Bae, however, praised Park’s efforts to improve inter-Korean relations, promising the Democrats’ support for her plan.