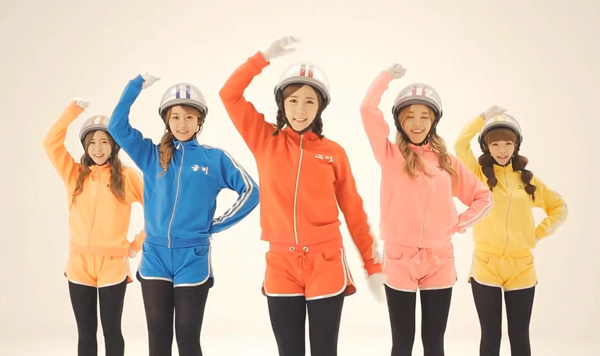 Girl group Crayon Pop, which garnered popularity for its music video in which two or three of the members jump in turns, took the No. 1 place on the Billboard K-pop chart that came out on Thursday.

The result came after Billboard predicted a rosy future for Crayon Pop. They considered the group a K-pop rookie that will follow in the footsteps of Psy, who became a world star after his horse dance went viral online about a year ago.

However, although Crayon Pop’s song “Bar Bar Bar” has received high rankings on local music charts in recent weeks, many have been surprised at the result since the group only released it on June 20.

The group is trying to continue its momentum by releasing a new song next month.

Meanwhile, the boy group B.A.P has taken the No. 1 place on Billboard’s world album chart with its recently released third mini-album, “Badman.”

It’s the second time the group has earned the honor on the same chart as its second mini-album, “One Shot,” was ranked in the top position.

The group is scheduled to have a two-day concert, “B.A.P Live On Earth Seoul (Wanted),” starting today at Seoul Olympic Park in Songpa, southern Seoul.

“Many fans from overseas have been coming to Korea recently to come to the concert,” said the group’s agency, TS Entertainment.

“It garners more attention because not only are fans from Japan, Taiwan, Thailand or elsewhere in Asia coming, but also fans from the Americas and Europe are entering the country.”