Making music do the talking

Making music do the talking 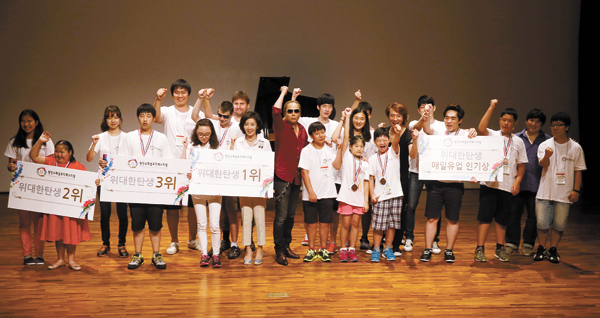 On Aug. 9, beautiful melodies drifted over Alpensia Resort in Pyeongchang, Gangwon. They were being created by mentally disabled musicians participating in the Pyeongchang Special Music Festival, which ran from Aug. 6 to 10.

The event was held to commemorate the successful hosting of the 2013 Special Olympics World Winter Games, which were held in the city at the beginning of the year. Eighty-eight mentally disabled musicians and artists came from 12 different countries - including Korea, the Czech Republic and Mongolia - to play music and create art.

Starting from 2 p.m. on Aug. 9, the mentally handicapped artists competed in pop and jazz events. Ten people went up against each other by singing or playing the drums, saxophone or guitar.

Guitarists Kim Tae-won and Kim Se-hwang of Boohwal and N.EX.T, respectively, were judges on the panel along with composer Bang Si-hyuk.

Jeon Ho-sung, an 11-year-old participant with multiple disabilities, beamed at the audience and then set upon his drums.

When the crowd started to cheer loudly and applaud, Jeon responded by pounding even more enthusiastically. The cheers kept up as he battered the drums right up to the front of the stage.

“Music, by nature, does not have a set form. His music, which didn’t have any rules, was very beautiful in its natural form,” said Kim Tae-won after Jeon’s performance.

Radek Polak, a 39-year-old keyboardist from the Czech Republic, followed Jeon. Polak suffers from both mental and sight disabilities, and was sporting black sunglasses as two officials helped him onto the stage.

He seemed restless at first, biting his name card and constantly looking up and down. But all that evaporated as he sat in front of the piano; he straightened up and a focus came over him. He fumbled through the keys and found the central note. Playing with all of the fingers on his left hand but only his right thumb, he nevertheless presented a beautiful performance of Czech folk music.

Polak currently plays piano and harmonica in a band composed of mentally disabled artists back in the Czech Republic.

“When I play piano or harmonica, nothing else comes into my mind. Even the fact that I can’t see or that I suffer from other disorders,” Polak said.

The performance had special meaning for judge Kim Tae-won, as he has a son with mental disabilities.

“This was a very, very beautiful performance. I can’t express how marvelous and noble it was with words. What’s going on in the minds of mentally disabled people is very interesting. It’s not painful to them, but only to those around them.

“We should discard our usual sympathy and assumption that their lives are miserable. Especially in the world of music, no disability should be a problem,” Kim said, his voice shaking.

The highlight of the competition was Kim Bum-soo, who sang “A Person Who Gives Happiness” by the Korean folk duo Haebaragi.

“Even if this path is harsh and far, I hope I can go on with you. You are a person who gives me happiness,” Kim sang.

For those participating in the Pyeongchang Special Music Festival, the song was a perfect pick. When they were performing on their instruments, no sign of disability could be spotted.

Hosted for the first time this summer, the Special Music Festival will be established as an annual event for musicians from all over the world.

From next year, it will be extended to a cultural event with a focus on music. The plan is to help mentally disabled people mix naturally with others. As such, there will be many joint performances with professional musicians.

During the opening ceremony, 19-year-old Lee Kwan-bae mesmerized the audience by playing Gabriel Faure’s “Apres un reve” (After I Dreamed) with cellist Chung Myung-wha. Lee first found out about his mental disability at the age of 7. He started to overcome it when he learned how to play piano in eighth grade.

He was the first mentally handicapped student to be accepted to Seoul National University’s Instrumental Music Department and is currently majoring in piano.

“No policy or law to help the mentally handicapped is good enough if people’s perception doesn’t change,” said Na Kyung-won, the event chairwoman.

“I hope we can change perceptions using culture,” she added.

In a concert at night, the band Boohwal, guitarists Lee Byeong-woo and Kim Se-hwang, and drummer Jeff Bowders performed. At Pyeongchang, they used music to go beyond the bounds of disability.