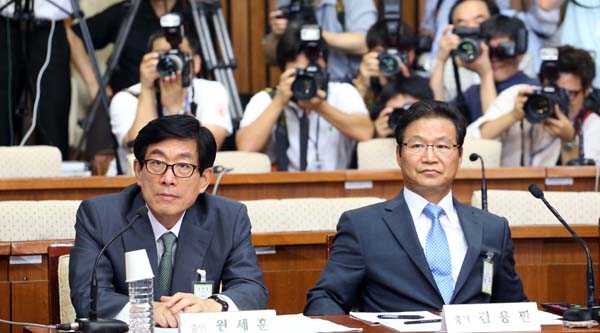 The two key witnesses in a National Assembly probe into alleged interference in the 2012 presidential election finally showed up at a hearing yesterday.

But they refused to take the oath or give testimony and denied all accusations against them.

Won Sei-hoon, former head of the National Intelligence Service, and Kim Yong-pan, former chief of Seoul Metropolitan Police Agency, appeared at a hearing held by the special investigation team formed by the ruling and opposition lawmakers yesterday in the National Assembly.

They had refused to attend a first hearing on Monday, and it was then canceled. The lawmakers finally issued subpoenas for them to appear.

Both Won and Kim are criminally charged in the same case being investigated by the Assembly and are awaiting trials.

Won has been charged of orchestrating a massive online smear campaign by the national spy agency against the Democratic Party’s presidential candidate, Moon Jae-in. Kim is charged with covering up the spy agency’s alleged political meddling.

The two men’s testimonies were expected to be the most important in the legislative investigation. But at the hearing yesterday, Won and Kim refused to take an oath to testify truthfully or answer any questions from lawmakers. They also denied all the criminal charges by the prosecution.

“I, as a witness, refuse to take the oath under the Criminal Procedure Act and the Act on Testimony, Appraisal, etc. before the National Assembly,” Kim said at the hearing. “In principle, I will refuse to answer all questions. Still, based on the characteristics of some questions, I will fully answer them if I can.”

Under the two acts, a witness can refuse to testify at a hearing by the National Assembly if the testimony reveals a state secret or if the testimony could influence an ongoing trial in which the witness is charged and he or she could be convicted because of it.

Perplexed by such refusals, which are rare at legislative hearings, DP lawmakers were upset.

“Refusing to take an oath as a witness is a grave situation, an insult to the people,” DP Representative Park Young-sun said at the hearing. “And answering the questions without taking the oath means they could give a false testimony.”

Kim answered a question on why the police abruptly announced an interim report of its investigation into the NIS case at 11 p.m. on Dec. 16, three days before last year’s presidential election.

At the time, the head of the Suseo Police Precinct in charge of the NIS case announced that they couldn’t find any evidence to prove NIS intervention in the election, giving a last-minute blow to the opposition, which had accused the NIS of the smear campaign.

“At the time, the case was a hot issue drawing public attention and the politicians were closely watching it,” Km said. “So both I and the chief of Suseo police shared the belief that we should make an immediate announcement [of the investigation results] no matter what it would be.”

“We also realized that if we didn’t make the announcement that day, some reporters would get a leak and make an exclusive report that night,” Kim said.

Kim acknowledged that he received a phone call from a high-ranking NIS official on Dec. 16, when he ordered Suseo police to make the announcement.

Suspecting the NIS pressured Kim to make the announcement, DP Representative Park Young-sun asked Kim if he received a phone call from Park Won-dong, a department director at the NIS.

Kim admitted he did, without telling her what they discussed.

Kim denied an allegation that a NIS worker visited his office on the morning of Dec. 16. He said, “I visited a hospital for treatment on my fingernails and arrived at the office at 2 p.m.”

Won reiterated a previous explanation. He said it was true that the NIS launched a certain online campaign during the election but as part of “psychological warfare” against North Korea.

“North Korea broadly strengthened its cyberwarfare by restructuring its anti-South espionage team in 2009,” Kim said. “In reaction to that, we also launched a psychological warfare team in the NIS.”

When asked by a Saenuri lawmaker if he was aware that the Roh Moo-hyun administration also used the NIS to promote the government by posting comments on the Internet, such as support for the Korea-U.S. free trade deal or an inter-Korean summit, Won said, “Yes, I received reports on that [from some officials].”

The probe will end next Friday and the ruling and opposition parties have yet to agree on grilling two more controversial witnesses. The Saenuri lawmakers have refused to call Representative Kim Moo-sung and Korean Ambassador to China Kwon Young-se, despite the Democrats’ demand.