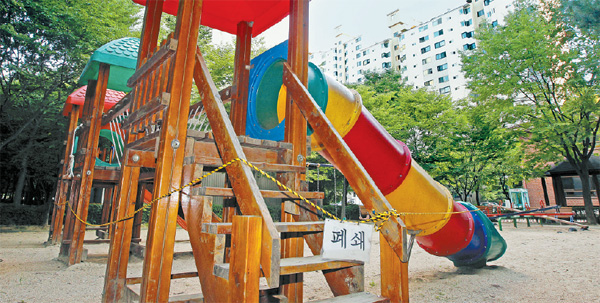 This playground at an apartment complex in Seo District in Goyang, Gyeonggi, has been cordoned off after failing to pass a safety test. The notice reads “Closed.”By Kim Seong-ryong

Cordoned off with yellow tape, a playground at an apartment complex in Cheongryangri-dong in northern Seoul looks like a crime scene. A notice reads, “Entry banned as playground failed to meet safety standards.”

Kim Soo-hyun, a 37-year-old resident, had to take her two young daughters elsewhere.

“Since the playground closed, I’ve had to take my daughters to a place a five-minute drive away,” Kim said. “It’s a pain, and I wonder when it’s going to reopen.”

This playground is the latest in a series that have been shut down after failing to pass safety tests. Under the law, all playgrounds nationwide must undergo such testing by Jan. 26, 2015. Failure to pass results in closure.

And a growing number of playgrounds are flunking the mandatory check. In the capital, 345 have had to shut down until the necessary repairs can be made.

“Six years have passed since the law was introduced,” said Yoon Seon-hwa, an official at the Korea Safety Education College, a safety testing agency that specializes in checking playgrounds.

“The government and apartment complexes should share the blame for having too many facilities that have not yet passed the safety test,” Yoon said.

At the heart of the quandary is a lack of funds. A number of apartment complexes can’t afford to fix the things the test has found need repairing.

It costs approximately 30 million won ($26,820) to replace old play equipment, and that can go as high as 80 million won.

Because of the financial burden, some cash-strapped complexes update just a few of their play areas and ditch the rest.

The Cheongryangri-dong apartment plans to restore two or three playgrounds out of five.

“It would cost at least 70 or 80 million won to repair all five spots,” said the complex manager, requesting anonymity.

“But we’ve only secured 40 million won, so we can only fix up some of them.”

Compounding the problem is some residents’ objection to spending valuable resources on playgrounds.

“Many playgrounds have no obvious problems or safety issues, so it makes people think repairs are a waste of money,” said a management official at an apartment complex in Sang-dong in Bucheon, Gyeonggi.

The necessary funds mostly come from apartment complexes’ long-term repair reserves and financial assistance from district offices. But the district offices are also coming up short.

Mapo District set aside 125 million won to update 15 playgrounds, but that’s a mere fraction of the 202 that require some form of repair.

The Dongdaemun District Office allocated 52 million won, but that’s far from enough to fix the 82 playgrounds that need it.

The central government is also not keen to allocate funds for playground maintenance.

“The government said district offices should be in charge of taking care of the matter.”