Park Ji-sung looks solid in return to his old club

Park Ji-sung looks solid in return to his old club 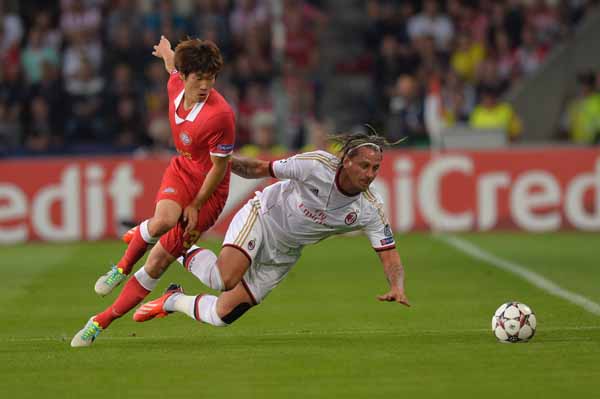 Korean star Park Ji-sung made a solid 68-minute start in his comeback match for PSV Eindhoven on Tuesday, helping the Dutch side hold AC Milan to a 1-1 draw in the first leg of the playoff series of the Champions League.

The Queens Park Rangers midfielder moved to Eindhoven on a season-long loan signed early this month but missed a Dutch league game with the Go Ahead Eagles on Aug. 17, due to an uncritical thigh injury.

Eindhoven provided him with a foothold to a successful career with Manchester United. During his 2002-05 stint with Eindhoven, Park scored 17 goals in 91 matches, leading the team to win the Dutch league twice and win the FA Cup once. His former Eindhoven teammate, Phillip Cocu, made his debut as the team’s coach this season.

Stephan El Shaarawy headed seven-time European champion Milan ahead after 15 minutes but Tim Matavz knocked in an equalizer on the hour.

The second leg of the competition will be held at the home stadium of the Italian club in San Siro at 3:45 a.m. on Aug. 29 in Korean time.

Kazakhstan champion Shakhter Karagandy stunned Scottish club Celtic with a score of 2-0. Real Sociedad won at Lyon with the same score and Viktoria Plzen beat Maribor 3-1 in the Czech Republic.

A further 10 clubs are in action on Wednesday as they chase a spot in the lucrative 32-team group stage, which starts in September.

Zenit can already start glancing ahead to the draw in Monaco later this month.

Shirokov, the Russia midfielder, took 27 minutes to find the net in Portugal, striking into the bottom of the net from Danny’s cross.

Although Andre Leone volleyed Pacos Ferreira level in the 58th, Shirokov was on target again from close range at the back post two minutes later to restore Zenit’s lead.

After Aleksandr Kerzhakov’s free kick went off the crossbar and off goalkeeper Matias Omar Degra in the 85th, Shirokov completed his hat trick in style in the 90th, blasting the ball into the top right corner.

It was a far tighter encounter in the Netherlands as Milan and PSV played out the night’s only draw.

PSV gifted Milan possession for the opener, with Ignazio Abate seizing the ball from Memphis Depay before whipping in a cross that El Shaarawy met with a free header.

But the 1988 European Cup winner leveled on the hour, with Jeffrey Bruma unleashing a dipping, swerving shot that goalkeeper Christian Abbiati spilled, and Matavz was alert to pounce and send a downward header into the net.

In Astana, Shakhter Karagandy closed in on a spot in the group stage for the first time with its victory over Celtic, the Scottish champion that beat Barcelona on its run to the Champions League’s last 16, last season.

Andrei Finonchenko put the hosts ahead after seizing on slack defending in the 12th minute and Sergei Khizhnichenko headed in another in the 77th in Astana.