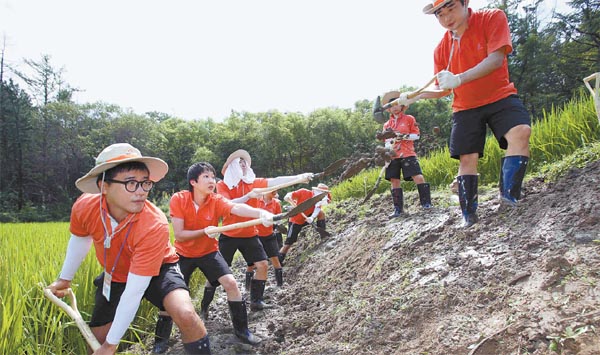 Hanwha Group’s new recruits work in a field in Gapyeong, Gyeonggi, that was damaged by this summer’s heavy rain. Provided by the company

New employees of Hanwha Group yesterday helped out residents in Gapyeong, Gyeonggi, who are trying to recover from torrential rain the past two months as part of their orientation.

About 160 employees participated in rebuilding banks between fields and streets, cleaning up mudslides, resetting rice crops upright and other tasks.

They also donated 3 million won ($2,682) to a community welfare center. The amount came from the trainees’ snack money and a contribution by the company.

“I am glad to help the community recover from damages caused by the rain. I learned how valuable mutual and sustainable growth is,” said Sung Da-won, an employee at Hanwha Life.

The community service began in mid-July, during which 170 new employees encouraged the company to make volunteering a regular part of the training.

Hanwha Group is not the only company requiring new employees to do volunteer work and such activities are growing popular among insurance companies, according to Korea Insurance News.

Meritz Fire and Marine Insurance had its rookie insurance workers begin their careers by taking care of people with mental and physical disabilities at Holt Ilsan Center, northern Gyeonggi, last Tuesday. The company launched the policy in 2007.

Considering the heavy rain this summer, Hanwha General Insurance recently had new employees participate in community service by producing transparent umbrellas for children. They decorated the umbrellas with drawings and basic traffic safety rules. The umbrellas were distributed to children at regional branch schools in rural areas.