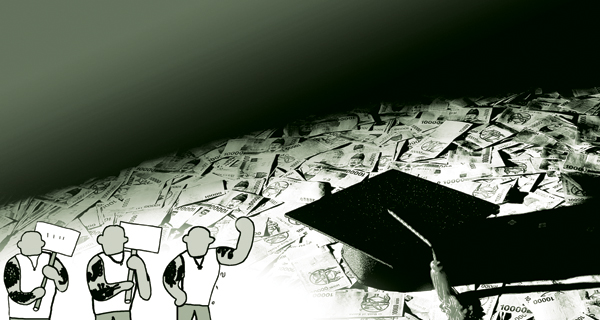 The South Jeolla Provincial Police Agency recently formed a team to investigate local crime syndicates working on - believe it or not - university campuses.

The team was formed in response to tips to police that many student bodies of local colleges are now headed by crime syndicate members enrolled as students.

Earlier this year, 18 members of student councils at two different two-year colleges in the coastal city of Suncheon were charged with embezzling about 400 million won ($358,000) of school money.

The 18 suspects, who were elected by their fellow students, were in fact dispatched by local crime syndicates to get their hands on school funds.

The police said the suspects are from Suncheon’s Chungang gang crime syndicate, which has been involved in student councils since 2001. They actually enrolled their members in the schools involved.

Having witnessed Chungang gang’s success, another syndicate in the region called Lions gang also started enrolling its members at another two-year college in Gwangyang, South Jeolla, in 2004. The gang members, some with lengthy criminal records, ran for student council presidency and were elected eight years in a row. With its members heading the student body, the Lions gang pocketed over 1.3 billion won over an eight-year period until the police busted them last year.

Student councils at higher education institutions in Korea are in charge of planning and hosting a variety of school events such as annual festivals and selecting a company to produce school yearbooks. Students pay student union fees to support the student council, which is also funded by the school’s administration.

The crime syndicates target community colleges that are easy to get into.

Many local colleges are struggling to recruit students and admit practically anyone willing to pay tuition.

To ensure their members are elected to the student councils, syndicates threaten student candidates and force them to withdraw from competing.

South Jeolla is not the only region having a headache with gangs penetrating local colleges.

Last month, the North Chungcheong Provincial Police Agency charged one former and one current student council head at a local two-year college of taking bribes totaling 23 million won from a yearbook publisher in return for giving it a contract. The two suspects are members of a crime syndicate named Paradise gang in Cheongju, North Chungcheong.

This year alone, there have been six cases in the country in which the police busted crime syndicate members who pocketed school money by running student councils.

The police said although it has been over a decade since crime syndicates first began penetrating college campuses, the scheme was busted only last year, partly because the schools themselves were indifferent as to how student councils were operated.

“Student councils operated by crime syndicates have embezzled school subsidies for student affairs with the schools being unaware,” said an official at the South Jeolla Police Agency.

Analysts say students suffer most when their student councils are hijacked by criminal gangsters.

“Schools need to strengthen their oversight into the functioning of student councils,” said Lee Chang-hun, a professor of police administration at Hannam University in Daejeon.