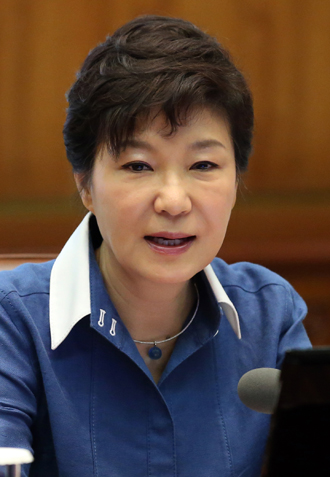 Seeking a breakthrough in a political impasse that has paralyzed the National Assembly, President Park Geun-hye yesterday renewed a proposal to meet with leaders of the ruling and opposition parties and pledged to reform the nation’s intelligence agency.

But the largest opposition party shrugged off her offer.

During a meeting with senior secretaries, Park reminded the leaders of the Saenuri and Democratic parties that she is open to sitting down for talks at any time to discuss issues that affect people’s livelihoods.

“The government and the politicians exist to help stabilize the people’s lives,” Park said. She implored the main parties to approve bills that are aimed at improving the economy, helping the real estate market and boosting employment.

On Aug. 5, Park floated the idea of a mini political summit in which she would meet with the chairmen and floor leaders of the main ruling and opposition parties in response to Democratic Party Chairman Kim Han-gill’s demand for a one-on-one meeting with her. The DP rejected that offer.

While reminding the opposition that she is still open for a five-way meeting, Park issued a warning to the Democrats to stop being overly confrontational and said they had crossed a “red line.”

“That will only split the people and cripple our politics,” she said. “I don’t think that’s the kind of politics that will benefit the people.”

The red line Park mentioned appeared to be the Democrats’ comparison of her election last year to a rigged presidential election in 1960.

The Democratic Party is refusing to cooperate in the National Assembly and is holding street protests over the ruling party’s sabotage of a legislative investigation into allegations that the National Intelligence Service intervened in last year’s presidential election on behalf of Park. They want the spy agency reformed and its chief replaced.

Park yesterday rejected the Democrats’ demand that she apologize for the alleged election interference and dismiss the director of the NIS.

“Some are now talking about a rigged presidential election, but I received no help from the National Intelligence Service and I never used it to my advantage during the election,” Park said. “I actually feel sad to see the corrupt practices that continued over from the past.”

Park said she will reform the NIS. But she reiterated her earlier position that self-reform was the first step for the agency. The Democrats have said the National Assembly must control any reform by revising the law governing the agency.

Functions of the National Assembly have been paralyzed for weeks. The special probe by lawmakers of the NIS’s alleged election interference ended without finding anything new.

With only a week before the National Assembly will open its regular September session, no signs of normalization were seen at the legislature as of yesterday.

The Saenuri Party yesterday tried to decide the legislative schedule for the next month, but the Democrats refused to cooperate. As of now, a series of economic bills intended to revitalize the moribund real estate market, stabilize skyrocketing home rental prices and boost foreign investments and employment are suspended in the legislature.

The National Assembly is also supposed to settle 2012’s government budget by Saturday, but the two sides couldn’t agree on when to discuss the matter.

“Talking about the people’s livelihoods without democracy is like a house made of cards,” said Representative Kim Kwan-young, spokesman of the DP.

“The president is avoiding the core of the problem by proposing to sit down for a talk to discuss people’s livelihoods without making promises to lay bare the truth about the National Intelligence Service’s illegal election interference, punishing those responsible and reforming the NIS.”

The DP made clear it still wants a one-on-one talk between its chairman and Park.